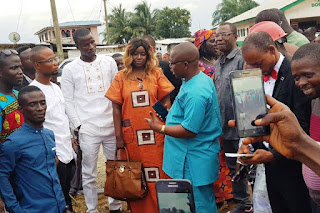 Paulita C. C. Wie is the Deputy Internal Affairs Minister for Urban Affairs, and the face of President George Weah's confidence in the young people of Liberia.

She applauded Minister Mobutu Nyenpan and the Ministry of Public Works for the vigorous work being done to improve the road network in a hectic rainy season.

Minister Wie encouraged community residents to work together in the spirit of unity and love for the community and its people to prepare the future of the younger generation.

She also asked community members to work with the local leadership and national government in bringing infrastructural development to their community through dialogue and constructive engagements.

She committed herself to working with the office of the Township commissioner, Women Association of SKD Community, the elders and young people, whom, she regards as gate keepers.

The female leader presented a check of L$60,000.00 to the Veterans Bureau as her personal scholarship contribution for two students in the community, mande a contribution for the Women Association of Doe Community to produce their Article of Incorporation, contributed on behalf of the Commissioner of Garworlohn Township on Bushord Island and promised to paint the exterior part of the community clinic, during her appearance as guest speaker and proxy for Mulbah K. Morlue, Chairman of the Coalition for Democratick Change (CDC) at the Veterans Bureau of Samuel K. Doe Community.