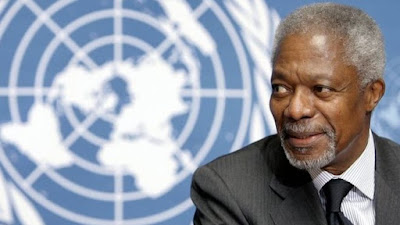 Kofi Annan has died at the age of 80 after a short illness, his family and foundation announced on Saturday.
Mr. Annan was the seventh secretary general of the UN between 1997 and 2006 and won the Nobel Peace Prize for his humanitarian work.  The diplomat, who was originally from Ghana, died in the Swiss city of Geneva, where he had been living for several years.
His tenure as UN secretary-general coincided with the Iraq War and the HIV/Aids pandemic.
Kofi Annan described his greatest achievement as the Millennium Development Goals which - for the first time - set global targets on issues such as poverty and child mortality.