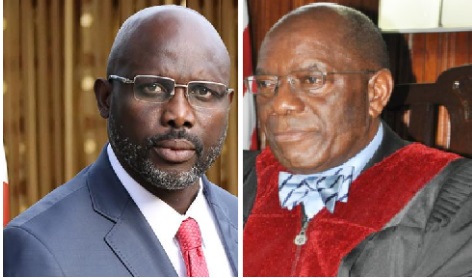 ﻿
Justice Banks is being retired today based on constitutional mandate in Article 72 (b) of Liberia’s 1986 Constitution requiring the retirement of the Chief Justice, Associate Justices and judges of subordinate courts of record at the age of 70.

Having reached his 70th birthday in June this year, Chief Justice Francis S. Korkpor, Sr. said Justice Banks was being required to continue in office to enable the outgoing Associate Justice to perform his judicial responsibility assigned him by the Constitution prior to reaching his 70th birthday.

“The Chief Justice and the Associate Justices of the Supreme Court and judges of subordinate courts of record shall be retired at the age of seventy; provided, however, that a justice of judge who has attained that age may continue in office for as long as may be necessary to enable him to render judgement or perform any other judicial duty in regard to proceedings entertained by him before [he] attained that age,” the Constitution says.

Justice Banks was appointed in 2010 to serve on the Supreme Court Bench nearing the end of former President Ellen Johnson - Sirleaf’s first term.
His retirement comes amid a petition for impeachment against Associate Justice Kabineh Ja’neh by two lawmakers from the ruling Coalition for Democratic Change or CDC.
His official retirement today also increases the search for his immediate replacement by President George Weah. Though several names have been mentioned including that of Senator Joseph Nagba of Sinoe County, it remains to be seen if the President will nominate him in the face of such economic hardship as his nomination will require another by-election to fill his gap, should he be nominated and confirm.
The recent low turnout in the just ended Senatorial by elections in both Bong and Montserrado Counties to replace President Weah and Vice President Jewel Howard Taylor shows voters fatigue.
By Winston W. Parley﻿