April 29, 2017 was not a great night for Liberian Entertainment awards 2017 Best Artist, Flex.  The singer showed up to the African Girls Rock After Party with a regular ticket, demanding to sit in the VIP session and the security was not having it.  The artist got kicked out of the event for acting disgruntled.  Two days later, Flex posted a disrespectful photo of Eugene Rogues, owner of African Girls Rock, basically calling him gay. 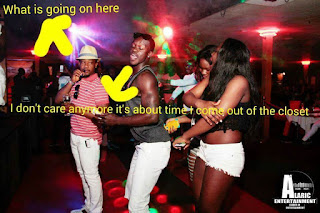