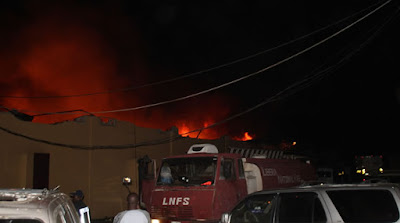 The warehouse of the National Drugs Service (NDS) and laboratory of the Liberia Medicine and Health Products Regulatory Authority late Tuesday evening were gutted by fire leading to the damage of drugs and laboratory equipment worth over half a million United States Dollars.
Both buildings are located in the compound of John F. Kennedy Memorial Medical Center.
The cause of the fire is yet to be established, but eye witnesses and security personnel at Hospital told FrontPageAfrica that some maintenance and rehabilitation works were carried out on the building. Wielding was also done at the building.
"The wielding men worked here today and changed the zinc and when they left, after few hours we saw fire in the warehouse," a security officer explained. The laboratory manager of the Liberia Medicine and Health Product Regulatory Authority, Alexander E. George, described the burning of the laboratory as a serious setback for the country.
The laboratory was used to test all of drugs before distributed to all government hospitals.
George said the fire caught the entire work force by surprise, noting that all the equipment has been destroyed.
"This is a complete setback for us, over half of a million equipment have been destroyed in the fire. I am right now confused and don’t know what to do," he explained.