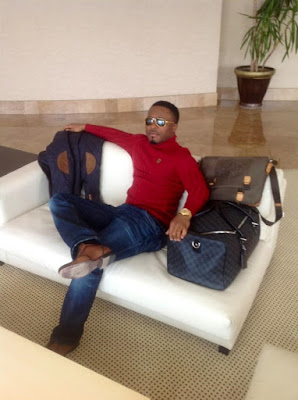 It was reported on Front Page Africa that Businessman Maxim Blaise claimed that he was assaulted by  Aries Dean.  C Liberia clearly did a followup with African Entertainment CEO Aries Dean on Tuesday, he strongly refuted allegations.
"This barefaced lie by fugitive Maxine Blaise and his attempt to smear my character after hiring ex combatants to take my cousin's life could only be sustained by a decidedly evil mind," Dean fires back in a response to Front-page Africa caption that he attempted to kidnap Maxine Blaise at Royal Hotel. He told C Liberia Clearly that Liberian reporters must respect the ethics of journalism and do everything within their reach to apply the basic principles of balance reporting. He said the case in question has to do with an alleged murder of a relative whom he named as Flecco Zelee and a forgery-theft that dated back in 2006.
"On June 8th while visiting the Royal Hotel for lunch, I unexpectedly bumped into the alleged suspect who was sitting comfortably in the lobby." Not knowing what to expect, Dean said he walked outside the hotel to communicate with his attorney to contact the police. Minutes later he walked back in the hotel and saw the suspect trying to flee the hotel premise. "So I walked up to him; confronted him, resulting in a scuffle which drew the attention of the hotel authorities and some guests. My intent to carry out a citizen-arrest while I await the police was met by force from the suspect. Immediately, the management asked me to vacate the hotel which I did respectfully," Dean revealed. "I was surprise as to how the suspect could've entered the country undetected by the security authorities who were in charge of the case. I could not wait like a coward to be taken out by this fugitive so I intentionally tried to alarm the situation to draw the police attention." In fact, the fraud case was later taken over by the Central Bank of  Liberia with no conclusion, due to the untimely passing of the attorney who was investigating the case then."
Dean vowed to reopen the case so as to bring justice and closure for his cousin Flecco Zelee who was stabbed repeatedly by his attackers who were allegedly hired by Maxime Blaise in 2006.


The assault charge against Mr. Dean was dismissed by the court due to lack of evidence.