Liberia Comes Second in Countries Most Want to Migrate List

December 11, 2018
After the migrant crisis swept Europe in 2015, migration emerged as a dominant, divisive issue – not only in European politics, where anti-migrant parties gained power, but also in politics elsewhere around the world.
This includes the US, where President Donald Trump’s demand for funding for a border wall with Mexico could still lead to a partial government shutdown this year.
Instead of any of this acting as a deterrent, a new poll by Gallup has found that the desire to migrate permanently to another country actually increased between 2015 and 2017.
Gallup’s surveys throughout this period found 15% of the world’s adults – or more than 750 million people – said that they would like to move to another country if they had the opportunity.
This is up from 14% between 2013 and 2016 and 13% between 2010 and 2012, but still lower than the 16% between 2007 and 2009.
The survey is based on a rolling average of interviews with 453,122 adults in 152 countries and areas between 2015 and 2017.
Increasing desire
While shy of the record-high 16%, the desire to migrate has rebounded since the years after the Great Recession, as conflict, famine and disaster continue to drive people from their homes in some parts of the world, the survey found.
Desire increased most between the 2010-2012 and 2015-2017 periods in a number of regions already known for sending migrants, such as sub-Saharan Africa, Latin America and the Caribbean, and the Middle East and North Africa.
“But desire is also up significantly in Northern America, where 14% want to migrate after years of remaining flat near 10%. This is almost entirely driven by increases in the US in 2016 and 2017,” Gallup said.
The one in six Americans (16%) in 2017 who said they would like to move to another country is the highest measure to date.
“Yet in other places, desire to migrate has not changed much at all for years. In all regions of Asia, for example, the percentage of adults who would like to move to another country permanently has remained flat.
“In Europe, while desire to migrate has increased among residents of non-EU member states (which includes the Balkans), desire has remained flat among EU member states overall.”
In 13 countries, at least half of the adult population said that they would like to move to another country if they had the chance.
These countries represent nearly every region of the world – except for Northern America and Asia – and most of them were going through or are still going through some sort of upheaval.
Sierra Leone and Liberia, for example, were still in the grips of an Ebola outbreak when Gallup surveyed residents in those countries.
US still top destination for potential migrants 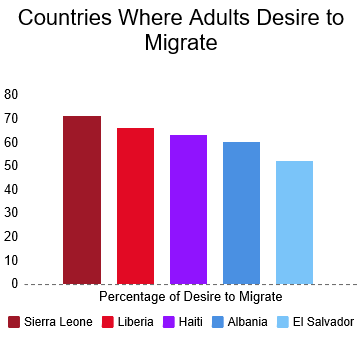 The countries where potential migrants say they would like to move – if they could – have generally been the same for the past 10 years.
In fact, roughly 18 countries attract two-thirds of all potential migrants worldwide, Gallup found.
“Although the image of US leadership took a beating between 2016 and 2017, the US continues to be the most desired destination country for potential migrants, as it has since Gallup started tracking these patterns a decade ago.
“One in five potential migrants (21%) – or about 158 million adults worldwide – name the US as their desired future residence.”
Canada, Germany, France, Australia and the United Kingdom also appeal to more than 30 million adults each.
While this increase in the desire to migrate may set off alarms among those who would like to see fewer people on the move, Gallup found that the percentage of those who have plans to move is much lower than the percentage who would like to move.
“Still, while these dreams will only come true for some people who desire to migrate, who these potential migrants are, where they’d like to leave and where they’d like to go all provide important information for leaders about who they might lose and who they are attracting,” it said.
﻿