Liberia: Only one African woman made it to Forbes’ 100 most powerful women in the world, in 2018 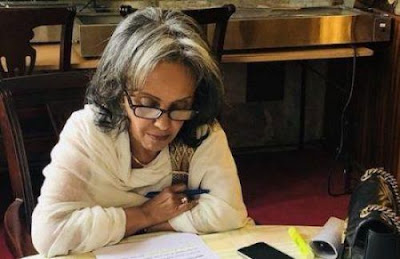 ﻿
(Ecofin Agency) - Only one African woman is in the list of the hundred most powerful women in the world in 2018 published on December 4, 2018, by American magazine Forbes. This woman is the Ethiopian president Sahle-Work Zewde who is at the 97th place of this ranking.
Miss Zewde (68) became president in October 2018, after the resignation of president Mulatu Teshome, thus becoming the fourth Ethiopian president since the adoption of the constitution in 1995.
Sahle-Work Zewde is a diplomat. She has been the special representative of the UN general secretary Antonio Guterres at the African Union. She has also been her country’s ambassador in France, Djibouti, Senegal and the permanent representative of Ethiopia at the Inter-Governmental Authority for Development (IGAD).
Many African female politicians had already been named in this ranking in the past. Among them are Liberia’s ex-president Ellen Johnson-Sirleaf, winner of the Nobel peace prize in 2011, and, Nigerian finance minister Ngozi Okonjo-Iweala.
The German Chancellor Angela Merkel holds the first place in the ranking for the eighth consecutive year, followed by British prime minister Theresa May who has been second for two consecutive years. Christine Lagarde, managing director of the IMF is the third.
Next follows Mary Barra, CEO of General Motors, Abigail Johnson, Fidelity Investments’ CEO, Melinda Gates, co-founder of Bill & Melinda Gates Foundation, Susan Wojcicki, YouTube’s CEO, Ana Patricia Botin of Banco Santander, Marillyn Hewson of Lockheed Martin and, Ginni Rometty who is the CEO of IBM.  ﻿