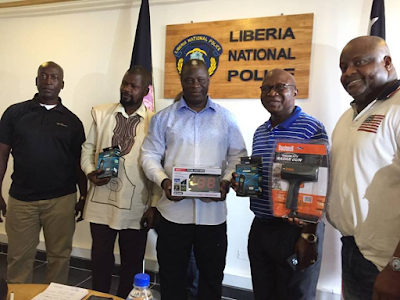 
According to LNP Inspector General, Col. Patrick Sudue, since the police force  was established, the donated speed guns will be the first to be owned by the security force.
The statement was made when Dr. Daniel Cassell and Tarplah Doe donated several speed guns and breathalyzer.
Dr. Cassell said the donation was given as a minimum contribution for the many sacrifices that police officers make in the absence of logistics.
He commended the officers for upholding their creed to protect and ensure safety for citizens.
These US-based Liberians said ensuring public safety has been their concern promising that regular contributions will be done.
“I started returning to Liberia three years ago. On my last trip, I met few senior officers, who told me that they needed some logistics to enable them to effectively perform.
“I was able to acquire speed guns and breathalyzer. I believe in public safety. I do believe that when the police have the right equipment, they will be effective,” Dr. Cassell said.
His donation is aimed at reducing the fatal accidents and excessive speeding.
“The speed guns will guide drivers on excessive speed, while the breathalyzer will safeguard them from driving with excessive alcohol in their system,” he added.
For Mr. Doe, the donation is to enhance the works of the police adding that more donations will be made.
“Police work means a lot, as your lives are always on the line while you struggle to protect citizens,” he noted.
Meanwhile, Col Sudue is calling on other Liberians to emulate the good example of two gentlemen.
“Many Liberians travel and return to Liberia with heavy criticisms against the force. Some leave with impacts. With budget constraints he (Dr. Cassell) saw the need to help this noble institution.”
“Since 1847 this is the first-speed guns LNP will have for themselves. These speed trackers will help; we have never held a speed gun before.”
Col. Sudue said the speed guns will be especifically used on the highways.