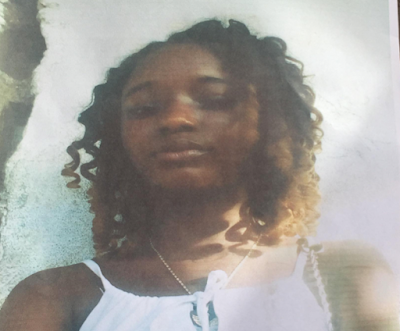 Monrovia – It was a pitiful moment when the mother of Vivian Wreh,15, saw her daughter’s naked body lying in the sand. The teen ager was reportedly gang-raped by unknown men the night before.
Vivian had gone out with friends for a party but she did not return on Thursday until her body was seen on early Friday morning, according to her mother Cameil Moore.
Moore said officers of Liberia National Police told her that her daughter was gang-raped in her anus and vagina.
Vivian was known as a blissful person, according to her friends.
The body was discovered 2 minutes away from her home, beside a fence that house a lot of charcoals. On her back, was a deep cut closer to her neck.
The mother said since the body was taken by forensic officers of the LIberia National Police, much has not been said to her.  She was only told that they (forensic officers)  were examining the body at John F. Kennedy Hospital.
“I am broken don’t know what to do, the Government must help us in tackle this issue of rape,” she said.
With teary eyes, Camiel said she will ensure that the perpetrators are apprehended by law enforcement officers, urging the authorities to act swiftly and find them.
The Ministry of Gender first quarter statistics show that girls between the age of 13 and 27 were raped this year, while 220 girls were gang-raped in Montserrado County.
Out of the total cases recorded during the quarter under review, rape accounts for 61% and has significantly increased by 5% as compared to the first quarter report of 2017.
The incident echoes the unending threats against women in the country despite calls to end violence against women during this year’s 16 Days of Activism.
From 25 November, the International Day for the Elimination of Violence against Women, to 10 December, Human Rights Day, the 16 Days of Activism against Gender-Based Violence Campaign is a time to galvanize action to end violence against women and girls around the world.
The international campaign originated from the first Women’s Global Leadership Institute coordinated by the Center for Women’s Global Leadership in 1991.