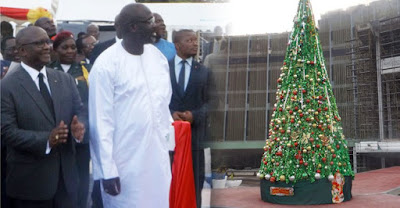 ﻿
President George Manneh Weah has lit the National Christmas Tree on the grounds of the Executive Mansion on Capitol Hill, the first in his capacity as Liberia’s chief executive.
His predecessor former President Ellen Johnson – Sirleaf, Chief Justice Francis S. Korkpor, Sr., and Associate Justices of the Supreme Court Bench, international partners, officials and members of the public were in attendance for the event on Tuesday, 18 December.
Mr. Weah in a very short message on behalf of his Vice President Jewel Howard Taylor, First Lady Clar Weah and in his own name expressed Merry Christmas and a very Prosperous New Year to all.
Before lighting the Christmas tree, President Weah describes light as life, and urged all to receive life through the lighting of the lights in Jesus name.The event saw the performances by Choirs and the Armed Forces of Liberia (AFL) Band.
Earlier, Minister of State for Presidential Affairs Nathaniel McGill said the day, December 18 marked the official lightening of the National Christmas Tree and the Cantata.Mr. McGill describes it as an important occasion because it is the first Christmas celebration under the Pro-Poor Government.
He welcomed all government officials, members of the diplomatic corps, friends and fellow Liberians to the important occasion.Mr. McGill asserts that Christmas is one of the most important times “we will like to celebrate,” saying after a wonderful 2018, “we are” now beginning to enter 2019.He wishes God’s blessings upon all Liberians in the land and breadth of the country.
By Winston W. Parley﻿