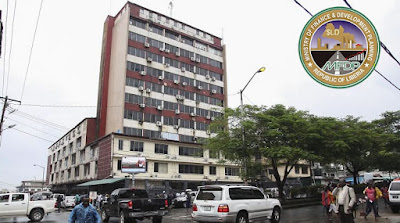 Mr. Flomo: "Gov't is continuity, but we don't subscribe to false claims and reportage."
Authorities of the Ministry of Finance and Development Planning (MFDP) on Monday, December 17, 2018, refuted a story published by a local newspaper under the headline "Kickback Suspected in US$180K Taylor-Era Debt Paid to 'Inactive' New York Company" , According to the story Finance and Economic Planning Minister, Mr. Samuel Tweah approved a payment of US$182,000.00 (One Hundred Eighty-Two Thousand United States Dollars) to a purported US-based construction company. According to the FrontPageAfrica(FPA) newspaper, the company has been inactive since 2003 shortly after the country emerged from civil war following Charles Taylor's abdication and exile in Nigeria.
In the publication, FrontPageAfrica newspaper (FPA), said nearly all payment vouchers in its possession originated from the instruction from the Ministry of State headed by Minister McGill to the Ministry Finance. Rather strangely, the payment to the Rocktown company was done in Monrovia since, according to FPA, the company is no longer active in the State of New York. The story however did not say whether the payment was made to a local representative of the company, transferred to an identified account or whether it was a cheque encashed over the counter at the Central Bank.

It does appear however that the payment to this defunct company was made from the national claims budget over which the Finance Minister has exclusive authority as it is only he who can authorize payment from the budget on claims. It can be recalled that in 2014 during the tenure of Amara Konneh, the online newsmagazine The Perspective, published a story of a similar bogus payment of US$2,161,996.80 (2 million one hundred sixty-one thousand, nine hundred ninety-six dollars eighty cents) US dollars which was made to the Solid Rock Investment. And it was paid on check# 40014882.
The check was drawn on A/C# 02-205-300001-62 from the claims budget. It was encashed over the counter at the CBL although there were in place at the time strict rules forbidding such over the counter transactions. According to a retired Ministry of Finance official, the budget on national claims during the past administration was a virtual slush fund for the Minister of Finance.
According to the official this latest FPA story bears close parallels to the 2014 Perspective story. But the latest FPA story also said, "Based on the loopholes, a senior administration official told FPA Sunday that the current government should have sought an appeal before agreeing to pay a dime."
However, in its Monday's clarification, Deputy Finance Minister for Economic Management, Augustus Flomo, said the story is "totally false and misleading, because there has been absolutely no payment made to Rocktown."
Though he denied the story, Flomo admitted that the payment is still being processed through the Ministry's internal system.
He said Domestic Debt Service flow goes through potential processes, claimant makes an official request to the Finance Minister about his/her claim; the Finance Minister then sends it down the stream (Deputy Minister and Assistant Minister), and then it arrives in the Debt Management Unit.
Mr. Flomo said the Debt Management Unit reviews the claim based upon the supporting document (2008 KPMG audit, External rental claim audit and court judgment), and recommend a decision for the Debt Management Committee. The Debt Management Committee consists of MFDP, Central Bank of Liberia, Ministries of Justice and States established by the Public Financial Management regulation.
In addition to the controls, he said, the Legal Department of the Ministry also provides legal opinion on all payments, including domestic debts to determine the legal basis for such payment.
"All of the claims within the period are taken to DMC, and a decision is made before making any payment. Unfortunately, the current government cannot take an appeal in a case that was adjudicated in 2016, and final judgment made thereto," Flomo said.
He added, "according to our records, after the rendition of the judgment, no further action was taken by the then government to perfect the appeal. As such, the claim automatically became a legal debt of the government," he said.
Minister Flomo continued, "to have made it appear that the current government is not responsible, and did not take the necessary due diligence in effecting the payment process, "is not only preposterous, but malicious as government is continuity."
"And because government is continuity, this government is under legal obligation to honor legitimate debts once she has the financial capacity to do so as such payments would not only improve the individual businesses, but the general well-being of the economy," Mr. Flomo noted. In view of this clarification by the Minister there are lingering questions why debts owed to the media continue to go unpaid even though they are also legitimate debts.
Authors
David A. Yates
﻿