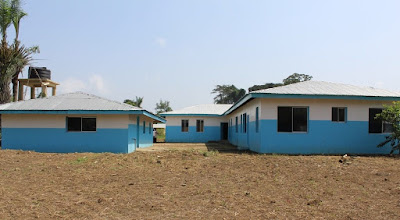 BONG COUNTY – Vice President Jewel Howard-Taylor, on Saturday, December 8, 2017, dedicated the Ahmed Sekou Toure Health Center in Jorwah, Bong County, urging citizens and residents of the area to maintain, protect, and make use of the center.
The 80-bedroom medical facility was constructed by a Liberian firm, FAH Construction Incorporated, with funding from Vice President Jewel Howard Taylor. It includes in and out-patient wards, delivery wards, a dispensary, and offices, among others.


Vice President Howard-Taylor praised Samaritan’s Purse for the provision of medical equipment, including furniture for the facility as well as the continuous support this faith-based humanitarian Organization renders to the country’s health care delivery services and other critical the nation’s developmental needs.
She said the Government will continue to do everything to decentralize governance and services on the sector, bringing services closer to the people.
According to a release from the Office of the Vice President, the comments by Vice President Howard-Taylor were contained in a statement delivered on her behalf by the Executive Director of the Group of 77, Madam Wyfia Ciapha.
The renovation of the Ahmed Sekou Toure Jorwah Health Center in Panta District, Bong County, is an initiative of the Vice President Taylor who found it prudent to alleviate the health concerns of the locals.
The Project is in response to pleas by the citizens to upgrade the facilitate which was left in ruins after several years of Liberia’s devastated civil crisis.
Madam Ciapha remarked, “VP Taylor’s efforts to reconstruct the health center started at the time she was Senator of the County during one of her many tours in the district at which time she was approached in a meeting by one of the eminent citizens in 2013.
They made a plea with Senator Taylor at the time to vouch for the People of Panta District, especially the residents of Jorwah, to have direct access to an equipped, functioning and viable health facility, thereby drawing her attention their lack of access to medical services in view of the absence of an effective health care center.
Madam Ciapha, on behalf of the Vice President, expressed profound gratitude to the people of Jorwah and its surroundings for their courage to work together towards the betterment of the county.
She reminded them that VP Howard-Taylor is noted for her passion for development and assured that the Office of the VP remains open for assistance to implement further development initiatives. She conveyed the VP’s call for unity amongst the people of Bong County in order to strengthen development activities in the county.
The dedication program for the over US$ 80,000 facility was attended by several international partners and government officials, including the Minister of Health, Dr. Willimena Jallah, Deputy Health Minister Norwu Howard, Bong County District#4 Representative Robert Womba, Superintendent Esther Walker, Guinea Ambassador Elhady Abdoulaye Dore, Samaritan’s Purse and scores of residents from neighboring towns in both Guinea and Liberia.
In response on behalf of the people of Bong County, Bong County Superintendent Esther Walker expressed thanks and appreciation to Vice President Howard-Taylor, Samaritan’s Purse, and to the Ambassador of Guinea Elhady Abdoulaye Dore for the relationship and continuous collaboration over time.
The Bong County Superintendent warned local county authorities against creating embarrassment for would-be health workers that will be assigned at the Health Center.
For her part, Liberia’s Minister of Health, Dr. Willimena Jallah, lauded the communities and all collaborating partners for the gesture, encouraging them to remain steadfast in keeping with the promotion of a sound health delivery system.
She maintained that good nutrition was necessary for the growth of the human body and advised parents to pay more attention to seeking healthy diets for their children.
Guinean Ambassador Elhady Abdoulaye Dore, who spoke through an interpreter, said the Government of Guinea was overwhelmed by the spirit of co-operation and oneness between the late Presidents William V.S. Tubman and William R. Tolbert of Liberia on the one hand and President Ahmed Sekou Toure of Guinea, on the other, which he noted remains cordial between the two sisterly countries.
He furthered that no one can distinguish between the citizens of the neighboring communities because of the common identities and traditional ties.
Ambassador Dore commended President George M. Weah and his Government for reconstructing a health facility that was named in honor of President Ahmed Sekou Toure.
﻿