Agnes Kollie Claims She Is Carrying Quincy B Child 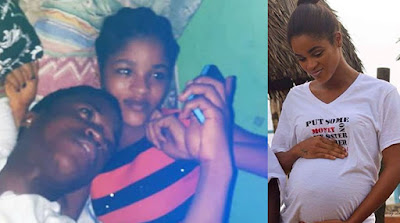 20 year-old Agnes Kollie, who is nine months pregnant and claims that the father of her unborn child is Quincy B.
She told FrontPageAfrica that Quincy never told his parents that she was pregnant for him and she’s known to his family to be only a friend of the deceased.
“We were cool and everything was going fine. I never went to see his family as a girlfriend, but I met them once and they asked me, I told them that we were friends; and by that time I was not pregnant,” said Agnes.
According to her, Quincy was happy over the pregnancy and took her to his manager, Lewiz McCarthy, informing him about it.
“Quincy told me his father is not in a good health condition suffering from stroke… because he never wanted him to do something or feel bad, so he asked me to wait after I give birth, then we will carry the child to his parents.”
In her last month of pregnancy, she said they agreed to name the child Quincy Jr., if it’s a boy or Quindy if it’s a girl.
“It was hectic and hard to accept when I got the news. Nothing much to say, I’m just here in my little corner praying for safe delivery.”