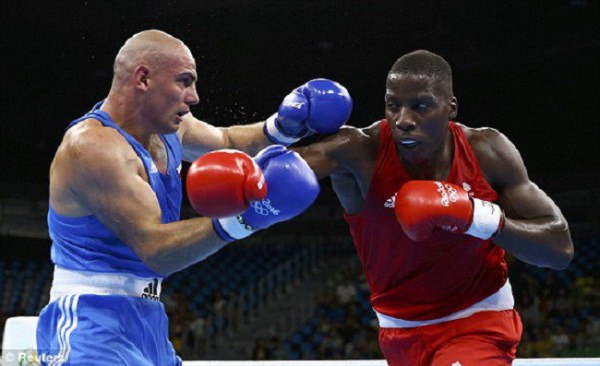 Nigerian-British boxer and Rio 2016 Olympian, Lawrence Okolie took just 20 seconds to score a knockout win on his professional debut.
The 24-year-old British cruiserweight, who has Nigerian parents, caught compatriot Geoffrey Cave with two solid right hands.
The bout followed Anthony Crolla’s points defeat by Jorge Linares at Manchester Arena.
‘Sorry to everyone that missed me fighting,’ Okolie tweeted. ‘The good news is a win by KO in 20 seconds!! Bad news is I’m back in the cage for now.’
London-based Cave, 33, has now lost all three of his professional fights.
Okolie competed at heavyweight and lost to Cuban, Erislandy Savon at the last-16 stage at the Rio Olympics.
He had boxed Savon once before and lost via a first-round stoppage.
But at the second attempt, he went the three-round distance with the Cuban who would eventually claim a bronze medal.
Savon had lost to Nigerian-born Anthony Joshua at the London 2012, which also inspired Okolie.
Okolie had explained that the likes of Joshua lured him into boxing.
‘Before I started boxing properly I was working in McDonald’s, and I was watching the Olympics during my breaks whenever I could,’ he told Sky Sports News HQ.
‘It was the only thing to do! There was a particular break where Usain Bolt won the 100m then Anthony Joshua won gold. I felt something then.
‘It was really inspirational. I started putting more work into training, and believing it more.’
Okolie hopes to become a world champion within four years and is scheduled to fight on the undercard of Ricky Burns’ super-lightweight unification bout with Julius Indongo on April 15.
This post appeared on NEWSROOM.