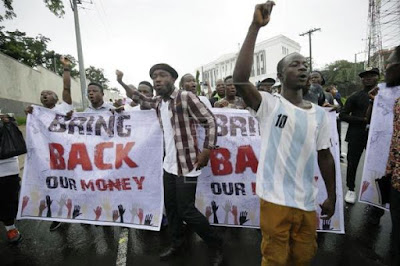 Opposition Alternative National Congress (ANC) Chairman Orashall Gould has denied claim by ruling Coalition for Democratic Change (CDC) that the ANC allegedly sponsored the “Bring Back Our Money” protest last month.
Mr. Gould says the ANC was in support of the protest, but the party did not fund the protest as has been alleged by the ruling party, CDC.
“These kinds of reckless comments [are] extremely disingenuous to the intelligence of the Liberian people. You are telling me in order for Liberians to stand up for their right, someone has to fund them?” he told a local radio station outside Monrovia Monday, 8 October.
Mr. Gould recalls that during the days when he was a member of the Congress for Democratic Change (CDC) which later formed a coalition ticket with other parties, the CDC as an opposition party staged protests that were not financed by anyone.
“We were protesting, advocating and even at times demonstrated for our right and nobody paid us,” Mr. Gould recalls. He notes that it is ludicrous for people in the ruling party to think that others were paid because they stood up for their rights.
According to him, there is no iota of truth in the information that the ANC political leader Mr. Alexander Cummings is financing protesters here. He says if Mr. Cummings or the party supported any protest financially, they will inform the public because there is no shame in doing what is legal.
Mr. Gould notes that the Constitution of Liberia protects the right of people wanting to express the their disenchantment. He continues that the ANC party’s main concern right now is the LD$15.5 billion dollars that allegedly disappeared in thin air.
“It’s our main concern …, our advocacies [are] not to bring the money back so that we can spend it,” he says, adding that they want the money back so that government can carry out programs. An investigative team appointed by President George Manneh Weah is probing the alleged missing L$15.5 billion, but the Central Bank of Liberia and the Minister of Finance say no money is missing, ahead of findings from the investigation.
Mr. Gould believes that government should appreciate the ANC for that, saying the party and other protesters are advocating for the government to have money to spend rightfully. He further mentions that the protest to bring back the missing money should be a matter of concern to the government.
Quizzed if the party welcomes protesters’ petition to ban all financial aid to Liberia and the freezing of the country’s foreign reserve, Chairman Gould discloses that the ANC is not in support of all the petitions. He says the party did not debate on smart sanctions to be placed on Liberia.
“What I’m saying to you is that the right of the protesters to channel their disenchantment, no doubt we support that right,” he says, adding that the list of things they had forwarded to the government were not debated by all.
“One of those things that we agreed on is to have a credible investigation conducted by this government and bringing in some foreign experts,” he clarifies.﻿