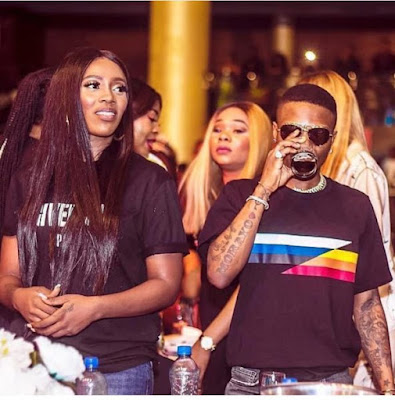 Reactions have been pouring in on Twitter following Wizkid’s sexually intense video with Tiwa Savage, further fueling their relationship rumours.
Nigerians had expressed their views suspecting that there is something special going on between popular Nigerian singers Tiwa Savage and Wizkid due to their level closeness.
Tiwa ex-husband Teebillz had, in September, put an end to the relationship rumours between the two when he stated on his Instagram post:
“Whether you like it or not Ayo is my little brother and he knows not to cross me on blood Gang… My Big Homie Sauce kid aka Sinzu guaranteed me on that even though he’s my blood. Don Jazzy will never allow that!”

Here are some of the reactions:

Teebillz had edible catering , Wizkid now used tiwa as the stew in his own fever video 😭😂
— DADDY THE FATHER (@SemiloooreAkoni) October 24, 2018

Just saw Tiwa and Wizkid’s Fever video. At 1st I thought Tiwa featured on the song but alas! She never sang.
The video intentional had Tiwa to cause controversy but the chemistry looked more than just being professional to me 🤷🏼‍♀️
Donjazzy allowed ‘it’ and TeeBillz will be mad🌚😬 pic.twitter.com/2D9HqBadQP
— Moji Delano (@MojiDelanoBlog) October 24, 2018

Wizkid just gave Teebillz the real fever but he no try at all. E for at least grab small boobs and booty so these pressed lots can actually shut up for life. You guys aren’t mad he’s dating someone older, y’all just mad he’s dating Tiwa but the real deal is, older women are swee pic.twitter.com/tSOd8Upbic
— OTUNBA COFFEE® ☕️ (@blac_cappuccino) October 24, 2018

People will say you can’t do shit, LMAO go and get money first then you’ll know everything is story and double standard… Just look at wizkid and tiwa 😂😂😂
— Ola of Lagos (@ItsHimOlaa) October 24, 2018