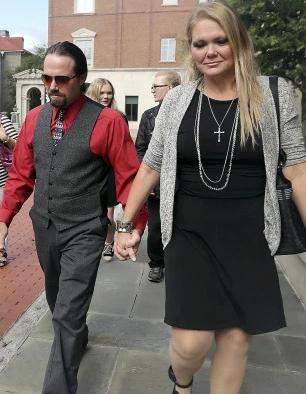 
A South Carolina woman is on trial for allegedly abducting her husband’s lover. She also reportedly forced her spouse to get her own name tattooed above his crotch as payback for cheating.
Tammy Moorer is accused of conspiring to kidnap 20-year-old Heather Elvis, who mysteriously vanished in December 2013 from Myrtle Beach, after she had a sexual relationship with her husband, Sidney Moorer. Nearly five years later, the young hostess hasn’t been found and is presumed dead.
Tammy Moorer is standing trial for the kidnap of Heather Elvis. Testimony in the kidnapping trial against Tammy Moorer revealed Monday that the jilted wife was overheard explaining the bizarre "punishment" to her 38-year-old husband, Sidney Moorer for cheating on her.


Prosecutors contend Tammy became vindictive after discovering the affair between her husband and Heather Elvis in October 2013 and hearing rumours about the possibility that Elvis was pregnant.
Jacob Melton, who was friends with one of the Moorers’ sons, testified Monday that Sidney got Tammy’s name tattooed on his lower waist when she learned about the extramarital affair.
"If you didn’t have that thing with that girl, this wouldn’t be happening," Tammy allegedly told her husband, according to Melton’s testimony.
As the trial entered its seventh day Monday, Elvis’ former employer also provided testimony.
Dennis Clark, a former manager at the Tilted Kilt, the bar where Sidney performed maintenance work and met Elvis, said Tammy demanded on the phone that the hostess be fired or her husband wouldn’t continue to do repairs.
Clark claimed the conversation occurred sometime between October and December 2013.
Clark told the court:


Tammy barged into the conversation and proceeded to tell me how Heather was causing problems for her family, spreading rumors that she was pregnant by her husband and [said] to fire her.

The defense team maintained Monday that the evidence in the trial shows there was an affair but doesn’t indicate that Tammy played any role in Elvis’ disappearance.
Both Tammy and Sidney have been charged in connection to Elvis’ case. The pair initially faced murder and kidnapping allegations in 2014, but two years later the murder charges were dropped.
Sidney was tried last year on the kidnapping charge, but the proceedings ended in a mistrial when the jurors couldn’t come to a unanimous decision. No future date has been set for his retrial.
In 2017, he was sentenced to 10 years in prison for obstruction of justice in the case.