October 30, 2018
Royal Hotel on Tuesday announced Grace Weah, popularly known as DJ Master Queen, has signed an agreement to become the Hotel's newest brand ambassador.
As part of the deal, the much-sought-after Media Personality will become the face of Royal Hotel in a deal that represents a major branding coup in the marketing industry. That means spending free nights at the hotel, free spa and restaurant services. Master Queen is also expected to post on social media about the hotel suites, gourmet food, spa treatments and more.
Queen is a perfect fit for the brand, which is known for its knack at luxurious treatments. DJ Master Queen is one of the most recognizably stylish faces in the entire Liberian Entertainment Industry,  with charisma and charm to match. 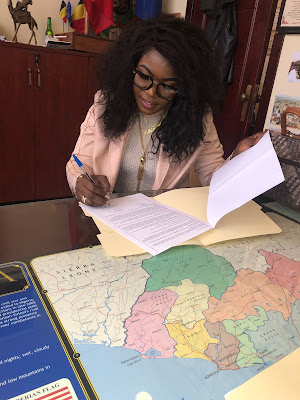