Liberia: Kanye West Is In Africa! 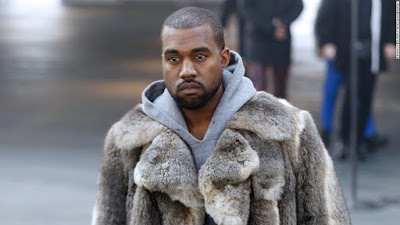 It’s not a sham!
A week after deleting his Twitter and Instagram accounts, the rapper was back on Twitter.
On Saturday he shared a series of videos he captioned "Mind control."
The last video featured more than nine minutes of Ye, as he now wants to be known, offering thoughts on myriad subjects including the role he thinks social media plays in mind control. Note some of the videos might contain offensive language.

"You know when people try to influence you through social media and try to tell you what to do, or if you post something that's, like, positive on Instagram, it gets taken down if it's not a part of a bigger agenda that's like mind control," he said.
Read More
But it was the videos he shared Sunday that had his music fans more excited.
West has traveled to Uganda, where he reportedly has constructed a pop-up studio to work on his next album, titled "Yandhi."
The rapper shared how he is spending time in the African country, including running with his 5-year-old daughter, North, one of three children with his wife, reality star Kim Kardashian West.

One tweet offers an inside look of the pop-up studio, which has been constructed as a makeshift dome.

"Relax your mind/ Let your conscious be free/ No matter what they say/ I'm gonna still be free," he raps at one point.
The Team Kanye Daily Instagram account has also been sharing images and video, including a Periscope of West rapping.
West's "Yandhi" album was originally expected to be released at the end of September.
The controversial rapper has been criticized for support of President Donald Trump and a meeting with the Commander-In-Chief in the Oval Office, where West had plenty to say.
On Monday the president of Uganda, Yoweri K Museveni, tweeted a welcome and photos of him meeting with West and Kardashian West.

I welcome American entertainment stars Kanye West and @KimKardashian to Uganda. I held fruitful discussions with the duo on how to promote Uganda's tourism and the arts. I thank Kanye for the gift of white sneakers. Enjoy your time in Uganda. It is the true Pearl of Africa. pic.twitter.com/BO0iD0sFCP
— Yoweri K Museveni (@KagutaMuseveni) October 15, 2018

"I held fruitful discussions with the duo on how to promote Uganda's tourism and the arts," Museveni tweeted. "I thank Kanye for the gift of white sneakers. Enjoy your time in Uganda. It is the true Pearl of Africa."