Paynesville, one of Liberia’s largest municipalities, has come under the spotlight for its filths and mountains of garbage while the city corporation appear incapable of remedying the situation.
But responding to criticisms from the public since concerns heightened over the increasing presence of garbage in the commercial district of Red Light and several other communities in the city, Mayor Belcher –Taylor argued that she took over a city government that had no logistics and funding.
“We don’t have any equipment here. When I first got appointed and I took over as city mayor, I didn’t even meet a wheelbarrow, I didn’t meet stationery, I didn’t have fuel to run the generator,” she told reporters Tuesday. 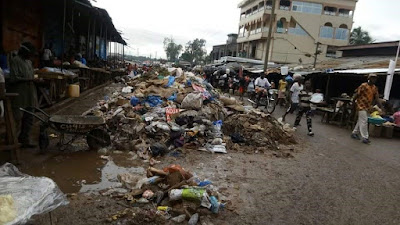 ﻿
“My first day here, I put my hand in my handbag and bought the fuel and stationery to start doing the people’s work. I never ask for reimbursement because it’s my duty as a public servant to serve my people and to serve them well.”
She also complained about how she’s struggling to manage the city due to lack of resources, adding that she was constrained to “beg” private individuals, who loaned the city trucks and loaders to dispose stockpile of garbage.
“ When I came here, there was not even one tricycle here. A friend of mine was the one that turn them over to this city. We are sourcing funding to be able to build transfer stations all over Paynesville for people to be able to dump their dirt. We want to do door to door garbage collection and have been asking the people of Paynesville to come and pay small fees to the city for garbage collection,” she said.
Mayor Belcher –Taylor disclosed that she inherited a debt of US$300,000 that she has been struggling to service while operating on a “negative bank balance”.
“We were running the city on friendship. I see one friend I beg for gas slip, I see one friend I call because I know the people who owned AMINATA – we go and credit because we don’t even have LEC in this building. We are running on generator. I can’t believe the city hall of the largest city doesn’t even have LEC when we have a substation next door,” she said.


At the same time, she accused the leadership of the Red Light market of not fully cooperating in order to clear the garbage off the market.
“I went to Gobachop market, I started crying because I couldn’t believe that my people were living like that,” she explained. “But the LMA allowed the marketers to sell under those conditions… I called for yellow machine on loan and escorted the yellow machine into Gobachop. We clean Gobachop, but it took us 10 days to clean Goba-chop market.”
She said discussions with the marketing association, which is collecting fees from marketers for garbage management, in order to remedy situation have shown little progress so far.


“They came here, and we talk back and forth; finally in March – the records are here – they brought in L$100,000 in March,” she said of the LMA contribution to PCC for waste collection.
She then frowned on the marketing association, while also calling on marketers themselves “to hold their leadership that they voted accountable to take them out of that dirt”.
“Either they pay to the city or find a way to strategize to clean out that dirt from Red Light and they should not shift blame on anybody because they are to be blame,” she blasted.
When PCC opted to conduct a second phase of cleaning-up of Red Light, companies the administration owed heavy debts requested rental fees before continuing the contract, she said.
“I beg and we got the trucks again and we started dealing with a new company. Right now, I have the people’s bill, US$40,176.00. Who wants to run a company and owed somebody 40,000 dollars and you don’t know when you going to get paid, but I pleaded and keep saying my name is on the line because LMA has refused. They are collecting the money, but they are not paying to the city. They collect garbage fees from the marketers to go sit down in that sun and rain with their children.”
She stressed that although the LMA is collecting garbage fees, it often default of its contribution to the City.
“We do collect fees as a city but those fees are use to run this office. We have to buy stationery; we have to buy ink we have to buy fuel. Businesses paid US$55 annually on an average. Some paid US$30; some paid US$25 for the year. We have over 5,000 businesses and we are even trying to track businesses in Paynesville. Out of this amount, only 2,902 have paid up to date.”
She added that when the ‘Weah for Clean City’ was launched, the President observed PCC challenges and approved “some finances for this city corporation”.
“We have gotten the first portion of the money but we had to paid some of the people we owed to be able to carry out this work. Because we were owing too much money.
We were able to get a 150 youths to put them to work because that was what that money was meant for – to empower young people.”