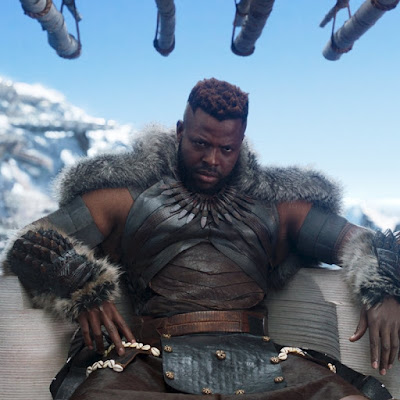 Black Panther is a global smash hit. The film has broken box office records,
raking in $218 million domestically over President’s Days weekend and
shattered the misconception that Black films can’t do well overseas.
While fans continue to discuss the complex themes in the film, many are
showering praise on Black Panther’s breakout star, Winston Duke.

Dubbed “Mountain Bae” and “M’Baeku” by some, Duke’s commanding and, at times, hilarious performance earned the newcomer widespread acclaim and scores of new (ahem, thirsty) admirers. So far, the 31-year-old actor has had a handful of roles on TV shows, including Modern Family, Law & Order, and Person of Interest, but Black Panther ensures we’ll be seeing a lot more from Duke.

Before he returns to the big screen this summer in Marvel’s next film, Avengers: Infinity War, here are

Duke grew up in Argyle, a small village on the Caribbean island of Tobago. Duke’s mother worked for the government and ran a restaurant in town, but later sold everything she had to move her family to Brooklyn, New York so that her daughter could go to medical school. Duke is close to his family and credits his mother for teaching him the value of hard work.

Duke was introduced to acting by his high school Spanish teacher and studied theater at the University of Buffalo, earning a BFA. After taking a year off to pursue acting, Duke enrolled in the Yale School of Drama where he earned his MFA and became friends with his Black Panther co-star Lupita Nyong’o, who also attended the prestigious program.

"She and I became really close because we shared that immigrant experience," Duke said in Esquire. "We shared the idea of having really big dreams knowing that we'd left our own country." He also confessed the pair saw the first Avengers movie together and dreamed of one day being in a big budget film. "We would always tell ourselves that [Marvel’s] going to do it someday, but we could never tell who," he said. "At that point, there was already the Blade films, but we really didn't know how Marvel would go about doing their first African superhero."

Though most agree Duke stole the show as M’Baku, leader of the Jabari tribe, it took four auditions for Black Panther director Ryan Coogler to trust him with the part. “He took me in every direction known to man with the character,” Duke told Vanity Fair. According to Duke, one reason Coogler may be have been so interested in finding the perfect fit for M’Baku was the director’s affinity for the Jabari tribe. “He’s such a Jabari man,” Duke explained. “He’s got the full beard, strong hair, very present. All these things. That’s a Jabari warrior right there.”

Though Duke has been acting for years, Black Panther marks his cinematic debut. Still, the newcomer felt confident among film vets like Angela Bassett and Forest Whitaker. “I felt like I deserved to be there. I knew I deserved to be there,” he said in an interview with GQ. “I've never doubted that I've deserved to be part of something so great, and once I was there, and everyone else was doing their best—not doing your best was doing both them and yourself a disservice. So it all felt right, and it was a deeply supportive space. I can't stress that enough. Everyone respected my presence, everyone respected my contributions, everyone engaged me in conversations to make the character better and make the scene better.”

To pull off M’Baku’s imposing character, the six-foot-five actor worked out six days a week and bulked up to 250-pounds, but he didn’t want to get ripped. Instead, Duke focused on gaining mass and strength. “[I was] lifting things, running, doing different routines to create this character that didn’t look aesthetically like he’s a gym head,” he explained. “He’s working out outside, he’s running, he’s picking up rocks maybe, pushing trees, or something. He’s a strong man, and he uses his weapon. He’s strong and he’s able because he knows his weapon. He’s not doing curls.”