Kendrick Lamar, SZA Highlight The Stunning Beauty Of Africa In ‘All The Stars’ Video 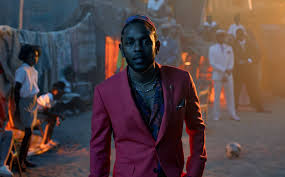 Hot, hot, hot! Kendrick Lamar and SZA  just dropped the video for “All the Stars,” the first single off Marvel’s “Black Panther” soundtrack.
The video, which premiered on Tuesday, highlights the glory of African cultures as Kendrick journeys from a literal sea of black hands paving the way for him through scenes of strikingly beautiful black people.
It begins and ends with a galaxy of stars in the shape of the continent that SZA dances in throughout the video. It also showcases dance, vibrant African-print clothing, traditional tribal body paint and royals dripping in gold.
“All the Stars,” directed by Dave Myers and the little homies, glorifies aspects of Africa that are rarely seen in mainstream industries and does so flawlessly.
And fans on Twitter went absolutely wild when the video premiered.