Our foreign policy must reflect achievements in entertainment, sports – Osinbajo 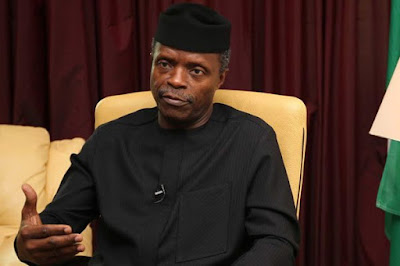 Nigerian Vice-president, Prof. Yemi Osinbajo has said that the foreign policy of the country must reflect the enviable feat Nigeria has attained in entertainment industry and sports in a way the country’s potentials, political, and cultural vision would be advanced across the globe.
He said the dynamic nature of world progression had made socio-economic advancement of a nation more difficult, saying it required additional efforts for countries like Nigeria to attain such a great height amongst the comity of nations.

According to a press statement made available to journalists by the Senior Special Assistant to the Vice-president on Media and Publicity, Mr Laolu Akande, Osinbajo made the remarks on Tuesday at the Inaugural Foreign Service Public Lecture held at the Ministry of Foreign Affairs, Abuja.
Osinbajo added that security challenges such as insurgency, cybercrime, and drug trafficking hadd seriously posed a serious threat to Nigerian foreign policy of the modern era, as the country strive to hold on to the time-honoured tools and traditions of diplomacy.
The statement quoted Osinbajo as saying “let me begin by warmly congratulating the Hon. Minister of Foreign Affairs; and the leadership and all the members of the Nigerian Foreign Service, on this inaugural edition of the Service’s Annual Public Lecture.
“I must say that this is a farsighted and innovative initiative and I have no doubt that this event will very quickly become a notable, agenda-setting platform in Nigeria’s public policy space.

It is remarkable that today’s lecture is holding in this magnificent edifice known now as the “Balewa House”, named after the man who was the driving force behind the establishment of Nigeria’s independent Foreign Service.
“It is also fitting that this first Annual Public Lecture is being chaired by General Yakubu Gowon who, as Head of State, nurtured, supported and sustained the Foreign Service during our most difficult years of nationhood.
“The Federal Government continues to be guided by the principles of Nigeria’s foreign policy which evolved in those early days and has been maintained over the years in various ways, including by pursuing the national interest in an afro-centric manner and combating racial discrimination and, particularly, emphasizing the dignity of the Nigerian and the African person. Those principles have proved timeless, six decades on, and form a welcome backdrop to today’s lecture theme: Reflections on Nigeria’s Foreign Policy: Diplomacy and the Foreign Service.
“Indeed, our foreign policy challenge is to be relevant to our times, to project our potential and our influence to the world, and to advance our political, cultural, social and economic vision. This is not as simple as it seems because the world is changing in various ways.

“Globalization requires better management of trade and financial flows just as there is a changing landscape of challenges relating to migration, environment, health and technology across the globe. Indeed, non-state actors, especially criminal non-state actors such as terrorist groups, cybercriminals, drug cartels have complicated a security landscape that was once viewed in relatively uncomplicated notions of peace and security.
“These developments have accordingly changed the demands on our diplomatic machinery. Therein lies the biggest challenge of the Foreign Service of the modern era: adapting to the demands of a new dispensation, whilst managing to hold on to the time-honoured tools and traditions of diplomacy.
“Since the traditional responses to all of these issues no longer carry the assuredness of the past, countries today, and our country in particular, have to use a more novel variety of tools, including soft power to advance their diplomatic objectives.
“In Nigeria, this would mean perhaps leveraging on entertainment, music and sports where we have excelled. Our achievements in entertainment, music and sports might be useful ways of opening doors for us diplomatically and economically.
“In addition, as the nation’s ear to the world, the Foreign Service has a role and a duty to influence policy at home, to consistently nudge the Government to take action where necessary in a proactive and engaged manner.
“This is especially critical at a time when record numbers of Nigerians are featuring in the tragic narratives of slave camps in North Africa and capsizing boats in the Mediterranean.
“I am pleased to know and to note that our newly-launched Economic Diplomacy Initiative of the Ministry of Foreign Affairs, is aimed at creating a platform for Nigerian businesses to more easily find and exploit global markets, and to tap into the economic potential of the Nigerian diaspora – who tend to be some of the most educated and entrepreneurial populations wherever they are to be found.
“We must do everything in our power to attract more capital to Nigeria, in Oil and Gas, Clean Energy, Agriculture, Transport, Power, Mining, amongst others; to spread the message and support the goals of the Economic Recovery and Growth Plan (ERGP).
“It is heart-warming that the Ministry of Foreign Affairs realizes its role in this, and understands the power of diplomacy in achieving success in this regard.
“I must say that I am especially pleased that Ministry of Foreign Affairs was able to get Ambassador (Dr.) Oladapo Fafowora, an exceptional diplomatist and academician, to give this lecture. Not only is Ambassador Fafowora a distinguished historian with a D-Phil from Oxford, but he is also a man of history. He was, as the chairman – General Gowon – has noted, the Ag. High Commissioner in Uganda, when the coup that unseated General Yakubu Gowon as Head of State, took place, and as folklore has it, he had the rather unpleasant task of breaking the news to General Gowon. But these are happier times, no more coups.
“But perhaps more importantly, Dr. Fafowora has that rare combination of career diplomat and in-depth commerce and industry experience, having served as DG, Manufacturers Association of Nigeria, MAN, immediately after his Foreign Service career. I am certainly looking forward to listening to his views.
“It is my hope and my desire that this Public Lecture series will become the platform where this all-important, ever-evolving role of Nigeria’s Foreign Service, will be debated and clarified well into the future.
I thank you for listening, and wish you the very best”.