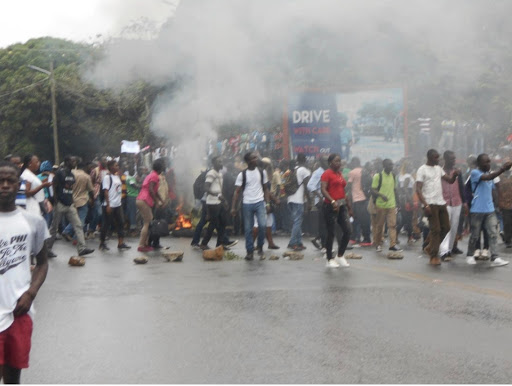 Students at Liberia’s main institution of higher learning, the University of Liberia have gone on the rampage, calling for the removal of the university’s president, Dr. Ophelia Weeks.

Burning tires and holding up banners in protests Friday, the students charged that administrators were preventing them from registering eventhough they had already paid their fees through the bank as required by the institution.

“How can students deposit their registration fees into the UL account and you stop them from registering?, student Mohammed Deybro lamented to a FrontPageAfrica reporter Friday.

Deybro explained that the issue has been in the air for more than three months now, dating back to the previous administration of President Ellen Johnson-Sirleaf. “Even former president Sirleaf and the National legislature are aware but they are yet to come to the student’s aid, so we are left with no other option to demonstration,” the student averred.

The students stormed the main road in front of the Ministry of Foreign Affairs, barricaded the entrance, and set ablaze tires and stones to prevent vehicles from passing.

Deybro, who is the President of the Student Unification Party(PUP), said the students were making it clear that they do not want President Weeks as UL president any longer.

He charged: “We cannot allow over eight thousand students who are stopped from completing their registration process and she wants to close the process, therefore we do not want Madam Ophelia “Evil” Weeks, because she has closed the process immaturely. Up to present I am yet to register. Yes, during the mid-term, it was this scam that they were going to open the registration process, so the students should allow the mid-term to continue, but after the mid-term and the graduation, they have refused to allow the students to register,” He said.

Speaker Bhophal Chambers, head of the lower house of the National Legislature sought to calm students by asking them to allow him passage to the UL campus to meet with the Administration on the students’ behalf but the students failed to budge, blocking vehicles from passing while preventing the speaker’s convoy from passing through.

Police Director designated Patrick Sudue also made frantic efforts to appeal with the students, but they refused, saying they will not leave until the Country Giant; (President Weah) came to address the matter.

Gebbah Melvin Kromah, Secretary General of the Student Unification Party said the student body have had a series of meetings with the board of trustees, and the administration relating to the registration process of the UL, but they refused.

Kromah dismissed calls for dialogue, stating that the students have run out of patience with the administration. “We are not calling for Madam Weeks to open the registration today, because the time of dialogue and diplomacy is over. We are calling on President Weah to remove the UL president and any attempt to keep her there, the UL will be no longer a peaceful place. There will be no exams and no offices on the both campuses will open until the satanic and diabolical Weeks can leave the UL for good. We will fight with our blood and we will continue this standstill action until President Weah can remove Dr. Weeks.”