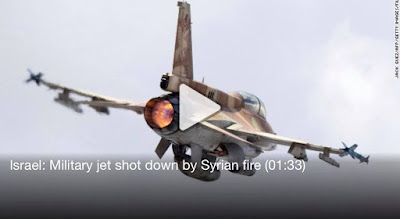 An Israeli F-16 fighter jet crashed Saturday in northern Israel due to "massive anti-aircraft fire" from Syrian forces, according to the Israeli army.
Both pilots aboard the Israeli jet are safe, the Israeli army reported.
The incident was reported after an Israeli combat helicopter came in contact with an Iranian unmanned aerial vehicle that had been launched from Syria, the Israel Defense Forces said in a statement.
Israeli forces also launched attacks on what they described as Iranian targets in Syria, the IDF said.
Jonathan Conricus, a spokesman with the Israel Defense Forces said in a tweet that "Iran is responsible for this severe violation of Israeli sovereignty."