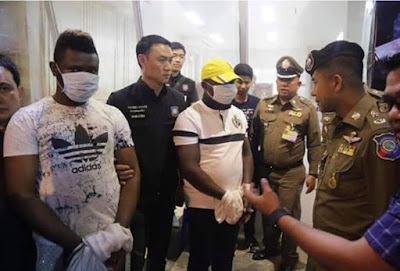 Briefing reporters at the police station in the Khao San area of Bangkok, deputy tourist police bureau commissioner, Surachet Hakpal also known Big Joke in the Thai media - said the Nigerian nationals, Emeka Celestine Eze, 31, and 44-year-old Oliver Obiora, pretended to be someone else and conned a Khamphaeng Phet woman out of a million baht. 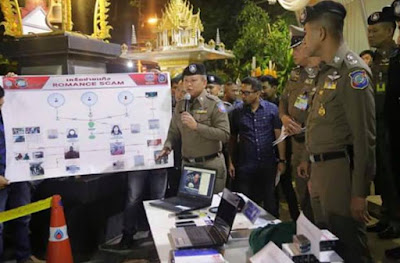 It was the usual story in such cases. After gaining the confidence and love of a woman they said they had sent gifts but money needed to be transferred to an account to secure their release from customs.

Other victims in the Kamphaeng Phet area are expected to come forward.

Emeka was nabbed with electronic evidence at the Regent Home Condo in Bang Na while his sidekick Oliver was taken down while attempting to flee the country at Don Meuang airport.
The money they obtained was laundered in the Pratunam area of Bangkok.

They were charged with computer fraud, false pretenses, illegal use of ATM cards and Oliver was on overstay too.