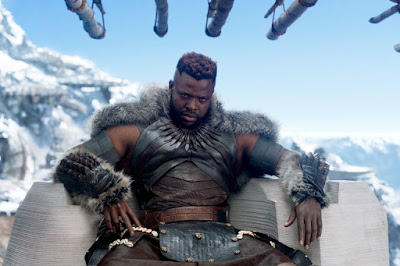 It takes a lot to stand out in a movie with a cast as stacked as Black Panther. But somehow newcomer Winston Duke manages to steal the show as M’Baku, leader of the Jabari tribe. GQ caught up with Duke to ask him what it's like to be a part of a phenomenon your very first time out.
The first words Winston Duke says in Black Panther as M'Baku, leader of the Jabari tribe, double as a hell of a metaphor for Black Panther itself: It's challenge day. The line is a reference to one of the traditions in the film's fictional nation of Wakanda, where each of the five tribes are free to challenge the heir to the throne to combat on the day of their coronation. Winner takes all. To Winston Duke, the release of Black Panther can't help but feel a bit like that, a direct call out to blockbuster cinema and the assumptions that drive it. It's challenge day.
As M'Baku, Winston Duke makes an immediate impression, even in a cast as stacked with revered legends and fan favorites as Black Panther. Well over six feet tall, the 31-year-old Tobagonian actor cuts an imposing figure, but it's one that's levied with tremendous wit and grace—in just a few brief scenes, Duke effortlessly goes from proud warrior to hilarious scene stealer, and he does it in no time at all.
Did we mention this is his first film role?
Following the release of Black Panther, GQ took the opportunity to speak with Duke about his breakout role, being in a movie that's also a moment, and what it was like to dunk on the film's token white guy.
GQ: What's it been like, just taking it in?
Winston Duke: It's more than I can ever imagine. Even leading up to this day, it's been really huge, full of fanfare. Everyone is eager to jump into the world that we created. And now that it's here, I believe it's as good as they anticipated, maybe even something more. I watched it for a third time last night, with fans at the El Capitan theater, and the energy was electric. I was in a room with people that were just people of color. And they were responsive, and they got it, and they were applauding, and they were moved, and I feel like we're on the forefront of something really great.
Even before the movie came out, there was a feeling of significance about it. How did it feel to be a part of something that people knew was going to be special?
I think we let our imaginations run wild with the thought of what this could do. I think it's going to be something none of us has ever expected, and that's because we've never seen it before. We don't even know what the manifestation of that reality could be like—that's what I'm excited about. I know it's going to be important, not just for children but for adults who've never seen this kind of narrative wrapped around black bodies before. My character has a line right when you first meet him, he says, "It's challenge day. Today is a new day." And it's kinetic. I feel it, I felt it last night in that audience, when I saw the movie this third time, and I'm seeing it in a totally new light.
What's it been like, watching it all these times?
The first time I saw it was just the reel, finally getting to see the final product... The second time, I watched it as a fan, and finally saw the movie. I was moved by the scenes. Growing up, I was raised by a single mother. I didn't have a father in the home and the line that struck me was, "Stand up, you are a king." I was moved to tears. And then last night, watching it now as an observer, watching people laugh out loud in droves and having a little boy come up to me—he was, I don't know, seven—and he was like, "Yeah, you're the guy, you're the guy who made the monkey noises and saved the day!" [laughs]