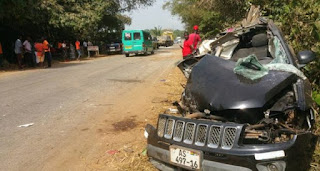 The Ghana Police Service has been giving an account of how twenty-year-old Ghanaian dancehall artiste, Ebony Reigns, known in real life as Priscilla Opoku-Kwarteng, died in an accident upon her return from Sunyani in the Brong Ahafo Region to Accra.
Many Ghanaians have been saddened by the demise of the starlet, but there have been conflicting accounts as to how the fatal crash happened.
According to a report from the Ghana Police Service, Ebony, and two others who were with her in a Jeep, lost their lives on Thursday night, after their car collided with an oncoming VIP bus, when their driver tried to avoid a heap of sand in their lane.
The police said the sand was meant for the maintenance of the road.
Whereas the occupants of the bus escaped unhurt, the police in its report said only the driver of the Jeep whose names was given as Chartey Oko Pinehad, aged 29, survived the accident, and is receiving treatment at the Bechem hospital.
The police also in its report said the remains of Ebony and the two others have been deposited at the Bechem government hospital mortuary for preservation and autopsy.
The police said the driver of the VIP Bus driver has also been given an “enquiry bail.”
Ebony, who’s billed to travel to Belgium this Saturday for a show, and later embark on an European tour, was in Sunyani to visit her mother who returned from the United Kingdom.
We’re ready to assist in investigations – VIP bus
While expressing condolence to the bereaved families, Management of VIP Transport Service said they are fully cooperating with police investigations.
“Management wishes to express its deepest condolences to the bereaved families of the individuals who lost their lives in the accident. The pain and anguish that their families must be going through clearly is unimaginable. We are cooperating fully with the police in their investigations and expect that the full facts of the circumstances of the accident will be made public in early course.”
“We wish to assure the general public that we remain committed to high and rigorous training standards for our drivers, to the safety of our buses, and to the safety and comfort of all our passengers,” a statement from VIP Transport service added.
Below is the full police report:
On 08/02/2018, at about 23:45 hours, suspect driver Chartey Oko Pinehad, aged 29, was driving Jeep No. AS497-16 from Sunyani to Accra with three occupants on board, whilst suspect driver Mohammed Abubakar aged 48 years, was also driving KIA Grad Bird [VIP] bus with registration No. GT 3232-17 from Accra to Sunyani with a set of passengers on board.
On reaching a section of the road between Nyamebekyere and Nsuta, there was a heap of sand in the lane of the Jeep which was being used for the road maintenance, and the driver in trying to avoid running into the sand, swerved onto the opposite lane and grazed the nearside portion of the bus and plunged into the railings at the edge of the road, killing the three other occupants identified as Francisca Nkansah Kuri aged 27 years, Priscilla Opoku Kwarteng [Ebony], and Lance Corporal Vondee Francis Atsu, aged 29 years.
The driver sustained injuries and was rushed to Bechem Government hospital for treatment. The occupants on board the bus escaped unhurt.
Bodies conveyed and deposited at Bechem government hospital mortuary for preservation and autopsy. Accident vehicle impounded at the station. Suspect driver on enquiry bail.
–
By: Godwin Akweiteh Allotey/citifmonline.com/Ghana