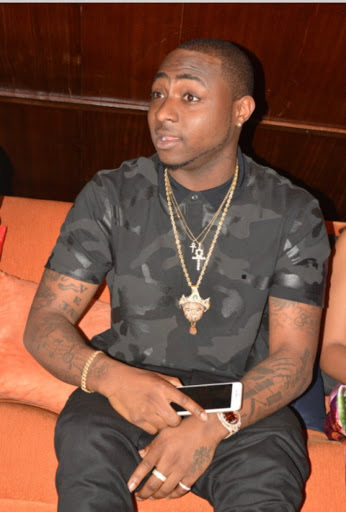 Davido, took to his Instagramm page on Tuesday to apologised to his fans for his inability to perform at the annual Felabration show, in honour of late Fela Anikulapo-Kuti.

He said, “To all my fans expecting me at Felabration tomorrow I’m sorry I would not be performing anymore.

“I promise to make it up. I love you guys! Everyone stay prayed up! I love each and every one of you…”

He also quoted from the Bible Matthew, Chapter, 5:4, “Blessed are those who mourn, for they shall be comforted.”

Davido who recently won the 2017 AFRIMMA Awards (Song of the Year and Video of the year,) also dedicated the awards to his late friends on Instagram stating; “One for Olu, One for Tagbo! Nothing but love, support and positive energy came from you guys.

“Thanks for you guys for keeping me motivated. This is ‘OUR’ Award. Thank you AFRIMMA. Thank you Lord.”

The award winning artiste who paid tribute to his late friend said further, “Olu I swear tonite is for you!! We killed shows back to back for four years straight.

Davido has lost three of his dear friends; Tagbo, Dj Olu and Chime in the past week due to unclear causes.

Olu and Chime were allegedly found dead in his (Olu’s) car just days after the death of another Davido’s crew member,Tagbo.

Davido had denied his involvement in Tagbo’s demise.

His reaction followed an allegation by former actress, Caroline Danjuma, who accused the artiste of negligence.

“People are just wicked this is what I get for treating everyone like my brother”, Davido wrote.

“I was deeply saddened to hear of the sudden death of my friend Tagbo.

“First and foremost my sincere condolences and prayers are with his family and friends at this time.

“I’ve been in this position before multiple times and also of recent.

“But it is also disappointing that false information and complete lies have been put out there using my name as usual.

“Out of total respect for late Tagbo and his family I’ll not discuss this matter further for now.’’

Meanwhile, Davido honoured the invitation of Lagos Police Commissioner Edgal Imohimi on Monday when he showed up at the command headquarter in relation with the death.

An insider said just as Davido showed up for questioning, his manager, Asa Asika and some workers were arrested by police and whisked to Area A Command in Bariga where they were briefly detained.

Some have alleged that Tagbo, Davido and others were engaged in a drinking game when he allegedly passed out.

The source said the drinking idea started with Davido who promised to give a brand new iPhone 8 and N200, 000 Naira to the winner.

Tagbo who was serious about winning the huge prize reportedly overdosed on the alcohol collapsed and died.