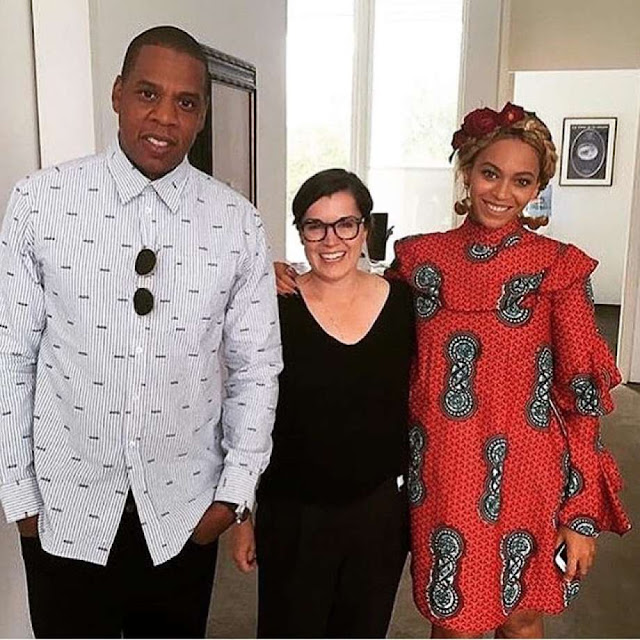 Social media is doing cartwheels over Beyoncé's nod to Africa.
The native-Houston superstar, with husband Jay-Z and family, popped into the Menil Collection on Sunday after her "Formation" tour performance at NRG stadium Saturday and was spotted wearing the Comandante ruffle dress by Stella Jean. The Italian-Haitian designer is known for her use of Ankara and other African prints. (Ankara is a popular African fabric that is 100 percent cotton and comes in vibrant patterns.)
Photos of Beyoncé in the dress started popping all over Instagram on Monday.
Through the years, she has shown a love for African prints. In 2014, she was featured in Vogue wearing an African print look by the Brooklyn-based Reuben Reuel, who founded his own fashion label, DemestiksNewYork.
When Beyoncé was on the magazine cover of Officiel Paris' 90th anniversary issue in March 2011, her mother, Tina Knowles, created her African-inspired dress.
African prints have had a small place in mainstream fashion for years. Celebs like Beyoncé, Rihanna and Gwen Stefani continue to fuel their popularity.
I recently wore the Rules of Engagement dress, $250, in a yellow and red Ankara print by the Houston-based, A Leap of Style, which owned by designer Karissa Lindsay and is available on leapofstyle.com and Melodrama Boutique.
I can't tell you how many compliments I received.
Then last fall, I slipped into the Viv skirt, $115, by another Houston-based fashion company, Attollé Clothiers. It is owned by Nigerian-born Bukola, a lawyer who moved to the United States in 2004 and launched Attollé Clothiers in Houston in 2011. Her collection was featured at African Fashion Week New York in 2012.
That Ankara-print skirt was a conversation piece.
So while the world tries to snap of Bey's dress, I'm glad we have options right at home.