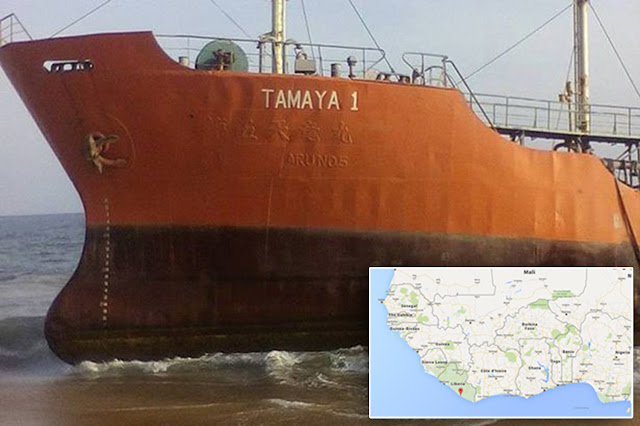 A Nigerian national has come forward to claim ownership of a ghost oil tanker that washed up on the shores of Liberia, and two of the tanker’s crew who had mysteriously vanished have now been located.
According to Liberia’s Ministry of Defense, Robert M. Saigba claimed ownership of the Tamaya 1, and Nigerian crewmembers Tomogho Oye Amaliri and Omowho Bernard have also come forward, though two other crew members who abandoned the ship also gave statements.
On May 10th, a Panama-registered oil tanker that disappeared from radar three weeks prior en route to Senegal washed up, empty and abandoned, on the coast of Liberia, sparking fears of a pirate attack gone wrong.

The last location of Tamaya 1 was recorded on April 22, heading to the port of Dakar, Senegal, from the south. All contact with the crew was then lost.
Though the initial presumptions were that the vessel had been attacked by pirates and the crew kidnapped, it appears that the ship experienced technical difficulties that forced the crew to abandon ship and board a fishing vessel, leaving their lifeboat behind.

Saigba told officials that he is one of two shareholders of a Nigerian Bayelsa State Company, H. Matic’s Resources Limited, which allegedly supplies petroleum products, marine logistics, haulage, civil engineering, and general contractual services.
According to crew members, the ship sprung a leak in the engine room, and efforts to stop the leak failed. The crew then allegedly disembarked on the lifeboat and were later rescued by a fishing boat.