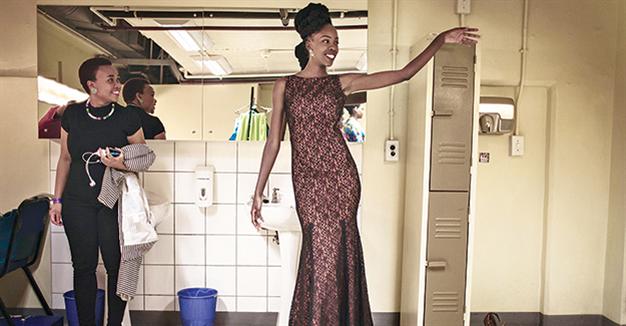 The 24-year-old dental hygienist beat 11 finalists drawn from an original list of 40 contestants from across the continent in the inaugural pageant at Johannesburg’s Gold Reef City casino late on April 29.

The swimsuit contest was also a departure from the beauty contest norm, with contestants wearing black t-shirts and tight shorts while dancing barefoot to music such as “Africa” by Mali’s legendary afro-pop musician Salif Keita.

The pageant is the brain child of South African film producer Neo Mashishi, who says it aims to empower young African women.

“This is the first ever Miss Africa Continent,” said Mashishi, adding that it had been five years in the making.
“This is about Africa, we are selling Africa to the world, and we are proud to be Africa.”

“The way everything was done was African, we didn’t emulate anything from Miss Universe, or Miss World,” he said.

Asamoah, who wore braids, entered the stage in a traditional Ghanaian Ashanti gold-colored beaded crown and then returned in a evening dress made from the country’s trademark kente cloth.

She walked away with a grant to study business management at Monash university in Johannesburg.

“There are a lot of things to be fixed in Africa - water, education, environmental issues,” she told AFP.

“My main concern is the empowerment of youths... so we can work hand in hand and put our continent in the best place it should be.” In the weeks running up to the event, the 12 finalists embarked on a series of pre-pageant activities, including showing off their culinary skills in cooking traditional meals from their native countries.

Ultimately, the organizers hope to involve the continental body, the African Union, “so our winner can play a role in uplifting Africa” and spearhead campaigns to fight Africa’s woes such as malaria, poverty and xenophobia.