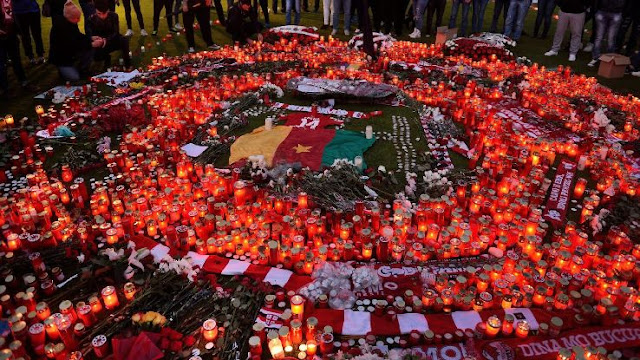 
About a thousand fans of the Dinamo Bucharest football team came to say one last goodbye to Cameroonian football player Patrick Ekeng, who died last Friday after he collapsed on the football field during a match in Romania’s top league, according to Digi Sport.
The casket containing Patrick Ekeng’s body was taken to Dinamo’s stadium on Friday morning, where his teammates, the team’s fans, and Romanian football officials said one last goodbye to the young footballer, before he was carried to the airport to be repatriated to Cameroon.
In the week that has passed since Ekeng’s death, hundreds of people have come to Dinamo’s stadium bringing flowers and lighting candles. Even Dinamo’s rival teams came to pay their respects to their fellow footballer.
The biggest Dinamo fan faction, Peluza Catalin Haldan, which bears the name of a former team captain who died in similar circumstances in 2000, announced they would prepare a special choreography in Ekeng’s memory at the Romanian Cup final that Dinamo plays next week (on May 17) against CFR Cluj.
They also launched a call to all of the team’s supporters who would go to the match to refrain from swearing against their rivals, no matter the final score.
26-year old Cameroonian midfielder Patrick Ekeng died last Friday after he collapsed on the field during a football match between Dinamo Bucharest and FC Viitorul Constanta, in Romania’s Liga I. He had just entered the field 7 minutes before he collapsed without any contact with another player.
An ambulance took him to the hospital only three minutes after he fell. At the hospitals, the doctors tried to resuscitate him for one and a half hours, but couldn’t save him.
The autopsy revealed that Ekeng suffered from genetic anomalies, including an enlarged heart and coronary anomalies. Usually, such conditions would be found during a thorough examination, but there are rarer cases when they aren’t spotted, according to medical sources quoted by Digi24 news station.
Patrick Ekeng was playing for Dinamo Bucharest since January this year. He played 11 matches for the team and scored an important goal against arch-rivals Steaua Bucharest.
Romanian authorities suspend private ambulance firm after footballer’s death.