Ycee’s ‘distinctive hair’ got him an endorsement deal 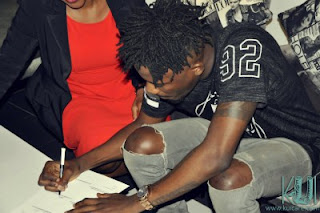 Fast rising rapper Ycee has just signed the first endorsement deal of his career.
The new deal sees him joining the KUI family as the official brand ambassador of the personal care brand.
An excited Ycee said, ‘I’m happy to be KUI’s brand ambassador and I really like how my hair feels after using their products’.
On why Ycee was chosen as the face, the CEO, Majiri Otobo says, ‘KUI believes Ycee is an ideal fit due to his distinctive hair and personality that suits the KUI mantra of being true to yourself. Ycee, and his team, believe in our products and ideals hence, both parties are looking forward to working together’.
Ycee is Tinny Entertainment’s frontline artist; since he broke out in mid 2015, he bagged two nominations at the 2015 Nigerian Entertainment Award, a 2015 AFRIMA nomination and was the winner of the keenly contested Rookie of the Year award at the 2015 Headies.