Why African music finally has the world's ear 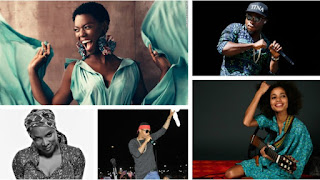 CNN - We are consuming more music than ever before, and from a wider range of sources.
Global music sales rose by 3.2% in 2015, and income from streaming now accounts for 43% of digital revenue, according to a new IFPI report.
Emerging markets in Africa, in particular, are becoming more profitable. UK-based record company Beggars Group, for example, reports that 20% of its revenue comes from emerging markets. It is now licensing music for the first time in Nigeria, Uganda and Angola, according to the IFPI report.
"Bits of the world that you don't see regularly as record markets are much bigger for us in the streaming world than the download or physical world," says Beggars Group founder and chairman, Martin Mills in the report.
South Africa, for example, saw overall digital revenue in music double in 2013, according to IFPI's 2014 report.
How streaming has widened exposure
Streaming is becoming more popular globally -- it rose 93% in 2015, according to IFPI.
As smartphone penetration in Africa increases -- it went from 2% in 2010 to 11% in 2013 -- streaming services are gaining ground, giving the music made on the African continent more opportunity to find a global audience.
In South Africa, it is estimated that 40% to 50% of digital income now comes from iTunes, according to IFPI's 2016 report.
"This is an amazing time for African music," Nigerian Afrobeats artist Mr Eazi tells CNN.
"Because of the internet Africans are exposed to the rest of the world without traveling. Afrobeat is now urbanized, the internet has made everything well-packaged.
"Now you see A-listers all around the world, like Drake and Nas, sampling African music; I've even heard Japanese music with African drums. It's invading pop culture and it's a marvelous time for African music."
Another A-lister who may have been influenced by African music is Alicia Keys, after releasing her single In Common, she had people wondering if it was, in fact, an Afrobeats song.

As the internet serves African music to the rest of the world, an appetite is developing for this market.
It is estimated that the South African entertainment and media industry will generate R175.4 billion ($122 billion) in revenue next year. Total exports from Africa's entertainment sector currently bring in roughly $480 million a year, according to Politifact.
"African music has always inspired many other genres and popular artists," UK-based radio presenter and club DJ Abrantee Boateng tells CNN.
"If the music is good and it is exposed to a wider audience, increased growth is almost inevitable."
The formula for international success seems to be good music and even better marketing.
"The artists started thinking beyond the continent of Africa and applying business strategies to their releases, securing international collaborations, making commercially appealing tunes and utilizing the power of social media to get noticed," Boateng adds.

What does the future hold for African music?

In two of sub-Saharan Africa's largest economies, Nigeria and Kenya, income from consumer spending on recorded music was predicted to reach $43 million and $19 million by the end of last year, respectively, according to a report by PricewaterhouseCoopers.
As digital music sales grow, the artists hope this means increased recognition for their work.
"My hope is that an African pop star will win a Grammy, and occupy the number 1 position on a Billboard chart," South African singer Lira tells CNN. "At the moment, we work as best as we can with the platforms that are available to us, at some point the power and influence of African music will be unavoidable."
"I'm predicting that DJs like Calvin Harris and David Guetta will start coming down to infuse African music in their sound," Mr Eazi adds.
"Artists will start getting proper publishing [deals] once the African music scene gets half as organized as it is in the UK, once there's distribution, once there's marketing."
Nigerian singer May7ven sees language as a huge advantage for African music.
"When you compare the growth potential of African countries to China and India, the major difference is that English is not the main language in those territories. So despite their numbers they may alienate the rest of the world, that's the reason why African music and film industry will be the world's largest."
Mr Eazi x Eugy - Dance for Me