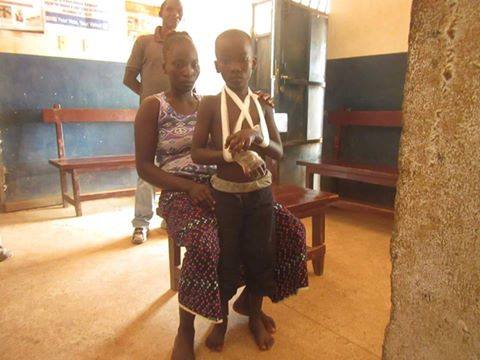 The Lofa County police Inspectorate has arrested and detained Mrs. Oretha Kendema, the mother of little Joseph Kendama for torturing him because he allegedly stole $50LD in Foya city/ Foya District, Lofa County. Mrs. Oretha Kendema was arrested on Thursday May 19, 2016 after she deliberately burn both hands of her eight years old son with fire for supposedly stealing $50.00LD (fifty Liberian Dollars) on grounds that she did not want to bring up a rogue that will terrorize residents and Liberians in the future. Mr.Tamba Kendema, the father of the boy and the husband of the perpetrator, who is presently the victim’s care taker at the Tellewoyan Memorial Hospital in Voinjama city/ Lofa County said, the event occurred in Foya city whilst he was out working hard to make ants meal for the family. According to the father, he and his wife have three living children with the boy being the first, but could not understand why she took such action against their own son. He asserted that the perpetrated is a breast feeding mother presently. He said according to eye witnesses when the child was brought to her, she told him that the other day you stole/ or you did the same thing, I told your father but he did nothing so this time I will not forgive you but will punish you. She first put the palm dirt in his hands and it on fire but he dropped it and ran, then she used his friends in the yard to catch him. I don’t want to a rogue a criminal son… Because of his action of running away, she became irritated, upon his friends catching him, she held him and placed the fire in his hands to have them burn finally. The magisterial court in Foya city has charged the mother with aggravated assaulted and will be forwarding her to Voinjama for persecution to the Tenth Judiciary Circuit Court. Whilst being interviewed on May 28, 2016 from the hospital compound, the father expressed appreciation to Mr. Sumo Kupee, a formal Senator of Lofa County, who is now Manager Director of LPRC for his intervention so far, he also thanked the Tellewoyan Memorial Hospital staff for their efforts whilst they continue to ensure that his son recover from his burn / sore. According to the father, his child has to take three injections daily and eats nutritional food even though the hospital is providing meals for all of the patients on the hospital’s walls. Meanwhile, health authorities have classified the burn as a second degree burn, at the same time they are encouraging other humanitarians to assist with some nutritional food for little Joseph Kendema to help in his recovery process. Remember that this boy could become a president, representative, senator, a minister or a doctor tomorrow but he will surely explain this cruel story to his children and others.