May 07, 2016
Dinamo Bucharest and Cameroon midfielder Patrick Ekeng is dead!
The 26-year-old footballer died at the Floreasca hospital after collapsing on the pitch during a Romanian league match against Viitorul Constanta on Friday May 6, 2016.
His club was leading 3-2 when he slumped just seven minutes after coming on as a substitute. Play resumed after Ekeng’s collapse and the game was completed. 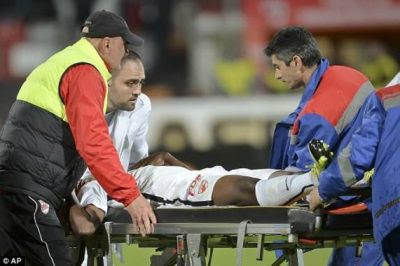 According to Floreasca hospital in Bucharest where he was rushed to, doctors tried for an hour to resuscitate him but failed.
A statement on Dinamo’s official Facebook page on Friday evening said: ‘Dinamo tonight lost footballer Claude Patrick Ekeng Ekeng forever. On behalf of all of Dinamo, sincere condolences to the bereaved family. God rest his soul.’
The Romanian Football Federation announced later on Friday night that
this week’s matches, including the Romanian Cup final between Dinamo
and CFR Cluj on Tuesday, would be postponed.
Dinamo Bucharest players lit candles along with supporters of the club to honour Ekeng after he died.
Ekeng started his professional career with Canon Yaounde and joined Le
Mans in 2009 as he made the move to Europe.
He also wore the jerseys of Rodez, Lausanne Sport and Cordoba before
signing for Dinamo at the start of 2016.
In 2003, Cameroon international midfielder Marc-Vivien Foe died after collapsing during a Confederations Cup match against Colombia in France.