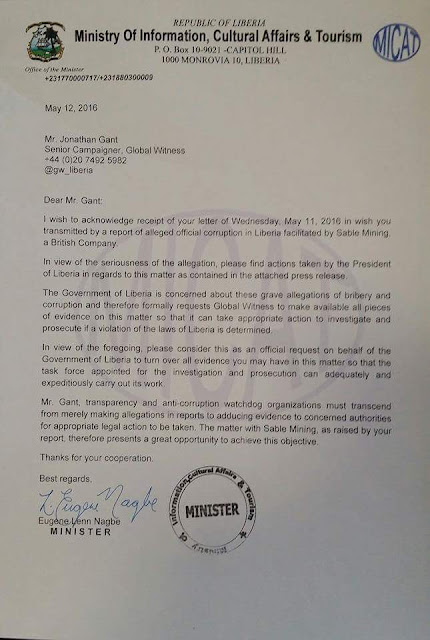 Monrovia, Liberia - President Ellen Johnson Sirleaf has, in consultation with the Ministry of Justice, appointed a Task Force to investigate the just published Global Witness on Liberia that linked several individuals. The Liberian leader announced the decision today following a review of the report which was submitted to the Government of Liberia by Global Witness alleging corruption and bribery by several former and current officials of government.
According to an Executive release, the task force is to be headed by Minister of State Without Portfolio, Cllr. J. Fonati Koffa, who is named a special prosecutor along with a team of lawyers from the Ministry of Justice. (The task force is also charged with investigating and resolving all allegations contained in current and past GAC reports). The Liberian leader has also urged all individuals named in the report to submit to and cooperate fully with the investigation. President Sirleaf has further written British Prime Minister David Cameron requesting full cooperation and assistance from the British Government, as a UK company is involved. Meanwhile, President Sirleaf has said “the report brings home the fact that the real purveyors of corruption are those predatory investors who rely on the weaknesses of some officials and the vulnerability of poor countries to carry out dubious business transactions while being harbored by rich countries”. She called on the leaders of “rich and powerful countries to use this matter involving Sable Mining to take strong punitive actions against criminal minded individuals, who export corruption to African countries, obtain illegal wealth and store their ill-gotten wealth in these western countries while economies of poor countries suffer as a result of these illicit deals”. President Sirleaf also pointed out that the foreign businessmen and corporations who are alleged to have paid bribes must also be investigated and prosecuted by their respective governments. Meanwhile, the Government of Liberia has formally requested Global Witness to make available all pieces of evidence cited in the report to assist the Taskforce in the investigation. In a letter to Global Witness, Information Minister Eugene Nagbe said “the Government of Liberia is concerned about these grave allegations of bribery and corruption and therefore formally requests Global Witness to make available all pieces of evidence on this matter so that it can take appropriate actions to investigate and prosecute if a violation of the laws of Liberia is determined”. Minister Nagbe said “transparency and anti-corruption watchdog organizations must transcend from merely making allegations in reports to adducing evidence to concerned authorities for appropriate legal action to be taken”.