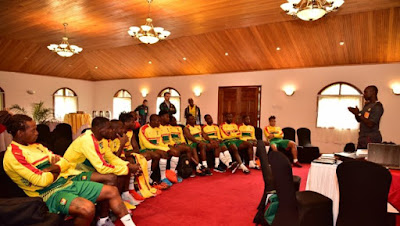 Cameroon coach Clarence Seedorf has praised his side’s fight and spirit during their come-from-behind 1-1 draw against away to the Comoros on matchday 2 of the 2019 Africa Cup of Nations qualifiers.

Cameroon needed to fight hard to pick a draw in an uninspiring game after falling behind in the early stages of the match which was Seedorf’s first in charge
However, the Dutch legend believed his side deserved a point from the game and praised the spirit shown by his players to come back into the match under tough conditions.
“I’m not disappointed because I know the team has given everything they have,” Seedorf said after the match.
“It was obviously difficult conditions. But the team spirit, the fighting spirit to try to escape with the victory was there.


“I do not think another team would come here to have an easy day. No, I am absolutely not disappointed, but happy with the spirit we have shown.
“It was certainly not our best game, but the second half was better, we had better chances, the players were patient.
“I finally got to know the players. This first step of this cycle has been very positive,” he concluded.﻿