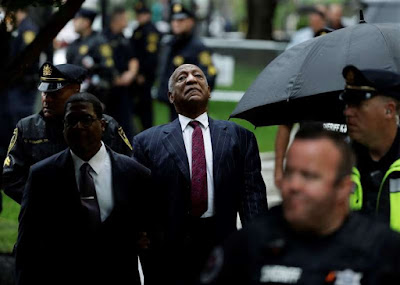 
NORRISTOWN, Pa. — A judge declared Bill Cosby a "sexually violent predator" on Tuesday as a first step toward sentencing the 81-year-old comedian for drugging and sexually assaulting a woman over a decade ago.
The classification means that Cosby must undergo monthly counseling for the rest of his life and report quarterly to authorities. His name will appear on a sex-offender registry sent to neighbors, schools and victims.
Montgomery County Judge Steven O'Neill made the decision as he prepared to sentence Cosby for violating Temple University women's basketball administrator Andrea Constand at his suburban Philadelphia estate in 2004.
The comic once known as America's Dad for his role as wise and understanding Dr. Cliff Huxtable on "The Cosby Show" in the 1980s faced anywhere from probation to 10 years in prison after being convicted in April in the first celebrity trial of the #MeToo era.
Prosecutors asked for five to 10 years behind bars. The defense requested house arrest, saying Cosby is too old and helpless to do time in prison. He is legally blind.
Cosby's lawyers had fought the "sexually violent predator" designation, arguing that Pennsylvania's sex-offender law is unconstitutional and that he is no threat to the public at his age. But O'Neill said prosecutors had met their burden of proof by "clear and convincing" evidence.
When the ruling came down, a woman in courtroom shot her fist into the air and whispered, "Yessss!"
Meanwhile, Constand said in a statement submitted to the court and released Tuesday that she has had to cope with years of anxiety and self-doubt that have left her "stuck in a holding pattern."
Constand, 45, said her training as a professional basketball player had led her to think she could handle anything, but "life as I knew it" ended on the night that Cosby knocked her out with pills and violated her.
Constand said she now lives alone with her two dogs and has trouble trusting people.
"When the sexual assault happened, I was a young woman brimming with confidence and looking forward to a future bright with possibilities," she wrote in her five-page statement.
"Now, almost 15 years later, I'm a middle-aged woman who's been stuck in a holding pattern for most of her adult life, unable to heal fully or to move forward."
She also wrote: "We may never know the full extent of his double life as a sexual predator but his decades-long reign of terror as a serial rapist is over."
In the years since Constand first went to authorities in 2005, more than 60 women have accused Cosby of sexual misconduct, though none of those claims have led to criminal charges.
The judge ruled on Cosby's sex-offender status after a defense psychologist, Timothy Foley, testified that the chances of the comedian committing another sex offense are "extraordinarily low" because he is old, legally blind and needs help getting around.
On Monday, a psychologist for the state testified that Cosby appears to have a mental disorder that gives him an uncontrollable urge to assault women.
Cosby was smiling and joking with his spokesman and sheriff's deputies as he settled into the courtroom Tuesday. On Day 1 of the sentencing, the comic laughed at times as the psychologist on the stand for the state portrayed him as a sexual predator with signs of a mental disorder.
Cameras were not allowed in the courtroom; they are generally banned in Pennsylvania.
Cosby spokesman Andrew Wyatt said the former TV star planned to remain silent when given the opportunity to address the court. Cosby did not testify at either of his two trials.
The proceedings took place as another extraordinary #MeToo drama continued to unfold on Capitol Hill, where Supreme Court nominee Brett Kavanaugh faces allegations of sexual misconduct from more than three decades ago.
The AP does not typically identify people who say they are victims of sexual assault unless they come forward publicly, which Constand and other accusers have done.
Cosby became the first black actor to star in a prime-time TV show, "I Spy," in 1965. He remained a Hollywood A-lister for much of the next half-century.
___
Associated Press writer Claudia Lauer contributed to this report.
﻿