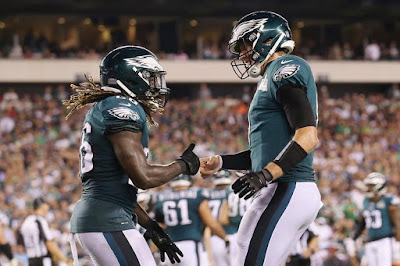 Twitter wasn't pleased by the sloppy football that was played Thursday night in the NFL season opener.
It’s been a long offseason for fans, but the NFL regular season finally kicked off Thursday night in the city of Brotherly Love as the Super Bowl champs Philadelphia Eagles hosted the Atlanta Falcons in a rematch of last year’s playoff game. Going into the game, the Eagles were a 1-point favorite, and they made those who bet on them happy campers as they won 18-12.
The game was a sloppy and low scoring affair as there were only 30 points in total and 26 penalties. The first touchdown wasn't scored until the 3rd quarter when Eagles RB Jay Ajayi rushed in an 11-yarder, regaining the lead 10-6. After a counter score from Atlanta’s Tevin Coleman, the Eagles scored one more time in the 4th quarter, again by Jay Ajayi. However the Falcons had a chance to win the game after a final 2-minute warning drive that took them down to the red zone of the Eagles with just seconds left. Down to the final play and the game on the line, the Falcons ran the same exact play they did last year in the playoffs; a pass to Julio Jones, who ended up catching the pass but was pushed out of bounds, ultimately running out the clock & ending the game 18-12.
As for your fantasy impact, Julio Jones want off per usual with 10 catches and 170 yards, while Eagles RB Jay Ajayi led the way with 2 touchdowns and 62 yards.
Naturally, twitter was abuzz throughout the first NFL game of the season, and we decided to compile some of the best reactions & tweets from Thursday night (below). Most of them are either complaining about Falcons’ play calling or the sloppy football that was played all night.﻿