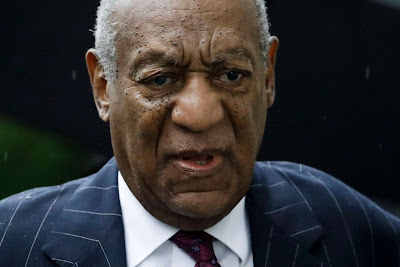 
Less than two hours after being designated a sexually violent predator, Bill Cosby has been sentenced to 3 to 10 years in prison by a Pennsylvania judge after being convicted for the 2004 rape of former Temple University employee Andrea Constand.
The ruling by Judge Steven O’Neill comes nearly three years after the much accused actor once known as “America’s Dad” was arrested an charged with three counts of aggravated indecent assault against Constand. With Cosby sitting in the Norristown, PA courthouse, Tuesday’s long-expected decision comes six months after a jury found the actor guilty of all three counts in a retrial.
“No one is above the law,” O’Neil said from the bench to Cosby, who was seated just in front of him in the Montgomery County courtroom. He added that it’s no matter what their “wealth, fame, celebrity or even philanthropy” — a clear dig at the latter element Cosby’s lawyers frequently brought regarding their client’s character.
Proclaiming he felt feel a duty to “the public, the Commonwealth and the defendant,” O’Neill said there would be “no probation, no limited confinement” such as home arrest. “I am compelled to consider the guidelines,” O’Neill told the court of the prison time, which is up to four years under legislative rules in the law.
“This is a court of law and I plan to sentence you under the law,” O’Neill said.
Attorneys for Cosby are expected to quickly file an appeal, but their client will have to cool his heels in prison while that case moves up to the state Supreme Court. His prison time will start immediately in a state facility; he had been under house arrest and out on $1 million bail.
Reading poetry of a great fall and noting “who he is and who he was,” O’Neill told Cosby while reading his sentence that he will have to participate in sex offenders treatment while behind bars.
More than 60 women have come forward in the past few years with accounts of Cosby drugging and assaulting them, but the Pennsylvania action was the only criminal case in the country due to the Keystone State’s longer-than-usual statute of limitations for sex crimes. Constand and several other alleged victims were in the jam-packed courtroom this afternoon.
Cosby is the first major conviction of the #MeToo and Time’s Up era that has seen the likes of Harvey Weinstein, Kevin Spacey, ex-CBS boss Les Moonves and others investigated, dethroned and, in the case of Weinstein, charged with crimes in the past year.
Having gone through a battalion of defense lawyers since being charged, Cosby sat in court yesterday and today as his current team tried to convince O’Neill to spare the 81-year-old prison time based on his age and health. But with more than 80 inmates older than Cosby in Pennsylvania’s prison system, and a recently opened $400 million facility for seniors with health issues like the actor, the argument never gained traction with either the judge or the D.A.
“You were old then,” the judge said while reading the sentence today, decimating the belief that Cosby is too old and sick for prison.
The guilty verdict at the April retrial held a combined sentence of up to 30 years, but on Monday the Montgomery County D.A. and the defense agreed to collapse the three counts into one with a 10-year maximum sentence. In recently filed paperwork and in closing arguments, D.A. Kevin Steele advocated for a sentence close to a decade plus fines and court costs. However, O’Neill indicated Monday that he was looking at a sentence closer to the state guidelines of 22 to 36 months.
Surrounded by his legal team, including an already hired appeal lawyer, Cosby was in apparently intense conversation with the attorneys before the final stage of the sentencing hearing began Tuesday. Unlike when he became a convicted felon this spring, he  did not verbally lash out at the prosecution with shouts of “a**hole.”
Meanwhile, today’s earlier ruling labeling Cosby a sexually violent predator means he must register as a sex offender for the rest of his life and check in with state police monthly. With the prison time, Cosby will also be required to attend counseling and provide details of any change in residence once he is released.
As sources told Deadline today, the Cosby will be handcuffed in the courtroom and led out by Montgomery County Sheriff’s Department deputies. He will then be taken to the lower part of the courthouse to complete paperwork before being transported to a nearby state prison.
Even as Cosby has admitted in depositions in a civil suit more than 10 years ago to giving Constand several Benadryl pills on the night of the alleged assault in his Philadelphia-area mansion in 2004, Cosby has unsuccessfully insisted through various investigations and two trials that the encounter with the ex-Temple University employee was consensual.