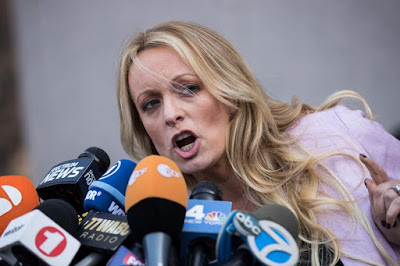 ﻿
Stormy Daniels hasn't been shy about releasing the intimate details of her relationship with Donald Trump, but apparently, she has much more to say. The Guardian got their hands on Daniels new memoir Full Disclosure, and some disturbing snippets about the president's penis have made their way online. She describes it as “smaller than average” but “not freakishly small."
“He knows he has an unusual penis,” Daniels writes. “It has a huge mushroom head. Like a toadstool." If that image isn't enough, she continues on to ruin a character from childhood video games. “I lay there, annoyed that I was getting fucked by a guy with Yeti pubes and a dick like the mushroom character in Mario Kart."
“It may have been the least impressive sex I’d ever had, but clearly, he didn’t share that opinion," she continued. In the memoir, Daniels also reveals that Trump manipulated his show, The Apprentice, to help the adult film star cheat. “We’ll figure out a way to get you the challenges beforehand,” she quotes Trump saying. “And we can devise your technique.”
“He was going to have me cheat, and it was 100 percent his idea," she explained. Full Disclosure drops on October 2. ﻿