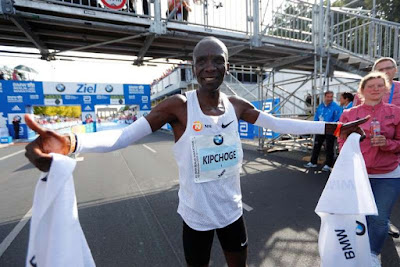 Kenya's Olympic champion Eliud Kipchoge shattered the marathon world record during a Sunday run, shaving off a staggering 78 seconds off the previous best and land the one major running crown that had eluded him.
The 33-year-old, widely seen as the greatest marathon runner of the modern era, ran an official time of two hours, one minute and 39 seconds on a sunny day along the flat inner-city course to smash Dennis Kimetto's 2:02:57