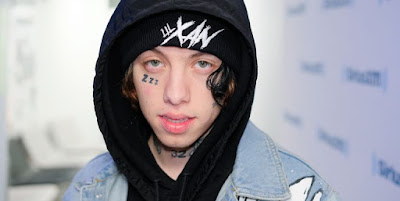 Lil Xan recently opened up about his friend Mac Miller's death and the impact it had on his own struggle with sobriety—and it looks like he paid tribute to the rapper by adding to the collection of tattoos on his face.
Lil Xan hit up Instagram a few days ago to debut a brand new tattoo above his eye, which is dedicated to Mac and reads "Memento Mori." It translates to "Remember that you will die."
"MOMENTO MORI 💔," Lil Xan wrote in the caption. "Miss you Mac, y’all can start hating me now."
Lil Xan's tattoo drew criticism from fans, and a day later he hopped back on Instagram to debut another face tattoo of tears dripping down his cheek, turning off the comments and writing "I do this for me, I could care less if this makes me ugly because that’s what I was going for, Ugly is the new Beautiful, well not really but there’s some truth to that, I love you guys."
In an interview with Adam22's podcast No Jumper (via E!), Lil Xan said that Mac's death made him question whether or not he wants to continue making music, saying, "When your hero dies, fuck that shit, I don't want to make music no more."
﻿