Football: President George Weah plays friendly for Liberia against Nigeria (aged 51!) as they retire No 14 shirt in his honour 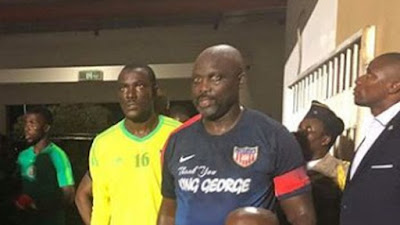 George Weah dusted off his boots and made one final appearance for Liberia on Tuesday night, all of 15 years after retiring.
The Ballon d'Or winner, who is now president of the country, was given the chance to wear his preferred No 14 shirt one last time in a friendly match with Nigeria.
Although sporting a little extra weight than in his playing days, the 51-year-old still showed some fleet-footedness and managed 79 minutes before leaving the field to a standing ovation.

A surprisingly strong Nigeria squad found themselves 2-0 up at half-time with Henry Onyekuru and Simeon Nwankwo scoring the goals.

Liberia then pulled one back from the penalty spot in the 89th minute, but the result seemed unimportant as Weah wandered back onto the pitch after full-time to suck in the adulation one last time.
Although a footballing legend in Liberia and, indeed, Africa, Weah is now the leader of his country after winning 60 per cent of the popular vote in December's election.

With the help of his political power, his former manager Arsene Wenger was invited to the country and inducted into Liberia's Order of Distinction as a Knight Grand Commander of the Humane Order of African Redemption — the highest honour bestowed by the country — for his services to African football.
Wenger, who left Arsenal last year, spotted Weah's talent while Monaco manager all of 30 years ago and brought him the principality in 1998.
He would later move to PSG, where he would become the one and only African player to win the Ballon d'Or in 1995.