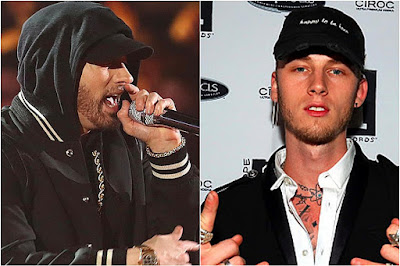 The feud between Emimem and Machine Gun Kelly continues to escalate, as Eminem breaks a new YouTube record while MGK lands in hot water with fans.
On Tuesday, YouTube announced that Eminem's "Killshot," the rapper's much-anticipated reply to Machine Gun Kelly's diss track "Rap Devil," became the biggest hip-hop debut in the streaming service's history with 38.1 million views in its first 24 hours.
As for MGK, the rapper has some explaining to do after social media users called out the rapper for being dishonest on Instagram.
MGK escalated his famous feud with Eminem Sunday night by posting a photo of himself wearing a shirt emblazoned with the “Killshot” artwork, Eminem’s response to his Slim Shady diss “Rap Devil.
In the picture, MGK is flipping off the camera with what appears to be a supportive crowd doing the same behind him. The photo was captioned “he missed,” but now concertgoers are revealing a different series of events than what appears to be depicted.

Fans explained what really happened in the post's comments section. Many claimed that MGK baited the crowd into unknowingly taking a picture that targeted Eminem. (The Cleveland native was opening for Fall Out Boy on the band's Mania tour in Orlando, Florida.)
One user said: "Opens for Fall out boy(not even his fans) wears a jacket to cover up the shirt, asks everyone to point the middle finger, turns around for the picture, takes off the jacket, makes it seem like everyone was in it, turns around, everybody boos him once they see the shirt, starts singing rap devil and gets boo’d even more."
Others in attendance shared similar stories on Twitter:
A user said: "Asking FOB fans to hold their middle fingers up just to make it seem everyone is showing it to Em while you’re the one booed till the very end while performing Rap Devil?"
Another posted a video of MGK's performance of "Rap Devil" being overwhelmed with boos from the crowd.
﻿