Nicki Minaj fires back at Cardi B "This woman's at the highest point in her career and she's throwing shoes? Get this woman some f***ing help." 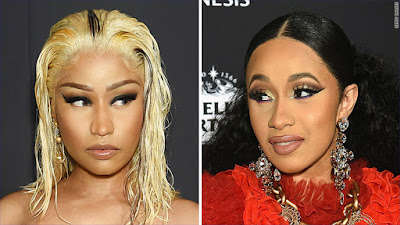 Nicki Minaj said Monday her recent dust-up with fellow rapper Cardi B was "mortifying and humiliating."
Minaj addressed the incident during the latest episode of her Beats 1's "Queen Radio" show.
"You're angry and you're sad. This is not funny," Minaj said of Cardi B. "Get this woman some f***ing help. This woman's at the highest point in her career and she's throwing shoes?"
The pair were leaving New York Fashion Week's annual Harper's Bazaar Icons party late Friday at the Plaza Hotel in New York City when Cardi B appeared to go after Minaj.
Minaj disputed during her broadcast that she said anything negative about Cardi B or her child, stating that claim was "all lies."
"I would never ridicule anyone's child," Minaj said. "[It's] so sad for someone to pin that on somebody. I would never talk about anyone's child or parenting. These lies are ridiculous."
Minaj also had a dire warning for her fellow rapper.
"You put your hands on certain people, you gonna die," she said. "Period."
﻿