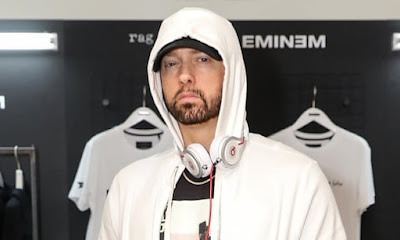 
Eminem has broken the UK chart record for consecutive No 1 albums, beating a record held jointly for 36 years by Abba and Led Zeppelin.
His album Kamikaze, a surprise release last week and his second album in less than a year, is his ninth No 1 in a row – a run stretching back 18 years to his second collection, The Marshall Mathers LP. Eminem put out a statement alongside the news, saying: “Does this mean I get to call myself Sir Eminem?”
Kamikaze is also the fourth-fastest selling album this year in the UK, behind Arctic Monkeys, Drake and George Ezra, and outsold the No 2 album, the soundtrack to Mamma Mia! Here We Go Again, by three copies to one. The album’s opening track, The Ringer, also reached No 4 in the singles chart – it features an attack on Donald Trump, describing him as an “evil serpent” – while two other album tracks, Lucky You and Fall, also reached the Top 10.
After garnering a reputation as a formidable “battle rapper” in the late 1990s, Eminem broke into the mainstream in 1999 after being mentored and signed by Dr Dre, with his debut album The Slim Shady LP. It remains the only one of his albums not to reach No 1 in the UK, though two of its singles reached the top five. While that album showcased his cartoonishly violent alter ego Slim Shady, he let his own voice come through on the follow-up, 2000’s The Marshall Mathers LP – regarded by many as one of the greatest rap albums of all time. Critics have been less kind in the years since, as Eminem struggled with prescription drug addiction, but his popularity hasn’t waned – 160,000 tickets to his pair of concerts at Twickenham stadium in July sold out in minutes.
As well as his contretemps with Trump, Kamikaze takes aim at a number of his rapper peers, including the likes of Lil Pump and Lil Yachty from the “Soundcloud rap” scene, who he perceives as technically inferior. On the track Not Alike, meanwhile, he makes an attack on Cleveland rapper Machine Gun Kelly, continuing a beef that began in 2012 when Kelly tweeted that Eminem’s daughter, then 15, was “hot”. A much-discussed war of words has continued in the past week, with Kelly releasing the diss track Rap Devil, and Eminem reportedly planning a retort. Kelly told a crowd in Grand Rapids, Michigan, on Thursday: “This is a battle between the past and the fucking future.”
Elsewhere in the album chart, Bristol punk band Idles reached No 5 with Joy Is an Act of Resistance, while Passenger, the Kooks and Troye Sivan all also reached the Top 10 with their new releases. Calvin Harris and Sam Smith’s collaborative track Promises reached No 1 in the singles chart for the first time, swapping places with Benny Blanco’s track Eastside.﻿